The contours of Charlie Rangel’s congressional district are expected to change dramatically this year, moving upwards into The Bronx and Westchester, according to Herman “Denny” Farrell, a longtime assemblyman and Harlem powerbroker.

Mr. Farrell revealed the news district lines at a town hall meeting on 147th Street last night where he said the rest of New York’s federal legislative lines have been held up as the State Assembly tried to figure out a way to create a district that would set up Mr. Rangel to win a 22nd term in the House of Representatives.

Mr. Rangel’s district has been synonymous with Harlem for generations and nurtured several of New York’s most important politcal figures, inclduing not just Mr. Rangel, but his predecessor, Adam Clayton Powell. The district must change because of sweeping demographic changes that have led to an influx of white and hispanic voters. Mr. Farrell explained how the problem was eventually solved and said Mr. Rangel is definitely going to run for re-election in “a district that can be won.”
END_OF_DOCUMENT_TOKEN_TO_BE_REPLACED 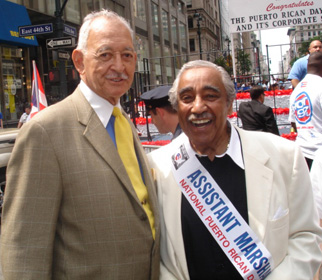