New York has become a tundra ripe for thundering herds of resurrected woolly mammoth, Newt and Mitt came close to initiating Hamageddon at a rather confusing event in South Carolina today and the Sealpocalypse is upon us, but don’t worry about something NASA has charmingly dubbed a “Double-barreled solar event“–we’ll be fine. It’ll even be pretty:

An active region on the Sun unleashed two blasts in quick succession (Jan. 19, 2012), which have sent particle clouds headed towards Earth. The images combine the wider field of view from SOHO’s C2 coronagraph with the Sun itself as seen in extreme UV light by Solar Dynamics Observatory (SDO). The initial burst above the Sun is from the sar side of the Sun and not headed our way. The next two bursts, one quickly following the other, are from the bright active region seen near the 10 o’clock position. A series of coronal loops rise up above the active region after these events. The impact on the geomagnetic storm Earth may cause some bright auroras…

This nifty graphic pointed out by SpaceWeather.com apparently indicates the geomagnetic storm will strike the Earth’s atmosphere sometime today anywhere between 6 p.m. and midnight.

Other than juicing auroras in the northern hemisphere, this Coronal Mass Ejection wasn’t strong enough to, say, rip away the atmosphere or at least destroy most power grids. That’d take an event like the Carrington Super Flare of 1859, which was a monster but did relatively little damage compared to what a similar blast might do today.

Still, we were advised years ago that 2012 will be a year of peak sunspot activity, so there will be plenty of fodder to come for those who don’t realize those silly Mayans just ran out of calendar pages and called it good.

[SOHO Pick of The Week] 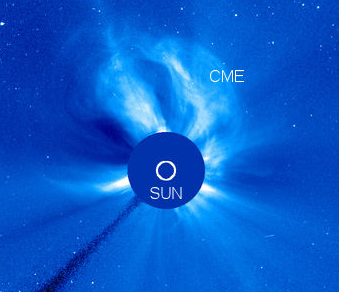