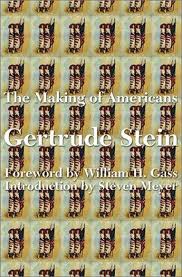 Triple Canopy, the nonprofit online arts magazine, will be inaugurating their new arts and culture center at 155 Freeman in Greenpoint with a marathon reading of Gertrude Stein’s 900-page novel The Making of Americans. The reading will likely take about 48 hours (January 20-22), or at least that’s how long it usually took at Paula Cooper Gallery, where members of the downtown art scene would gather on New Year’s Eve from 1974 to 2000 to read Stein’s novel straight through (for a couple of years they read Finnegans Wake because John Cage was bored with Stein).

“We’ve been timing ourselves,” said Sam Frank, an editor at Triple Canopy who is organizing the event. He said he’s shooting for 48 hours, but “whatever happens will happen.”

At Paula Cooper Gallery, the marathon reading was a kind of “drive-by in the midst of the New York new year’s festivities,” the gallery’s current director Steve Henry put it to us a few months back. They stopped in 2000, Mr. Henry said, because it was a new millennium, but the reading was by that point a New York tradition (Mr. Frank’s parents were among those who used to stop by the gallery on the last night of the year).

Triple Canopy’s new space on Freeman, which they will share with two other arts organizations, Light Industry and The Public School New York, is too small to hold a big party, so the marathon reading is acting like “a version of an open house,” Mr. Frank said. People will cycle in and out and readers will read for as little as 15 minutes or as much as an hour (“in the middle of the night people can kind of go on for as long as they want,” Mr. Frank said). So far, the line-up of readers includes the poet Charles Bernstein (who, admirably, will read for an hour), the novelist Lynne Tillman and the actor Jim Fletcher.

The Making of Americans is notoriously hard to get through and has frequently gone out of print since its initial publication. Stein finished writing it in 1911, but it was not published until 1925 with a meager print run of 500 copies. It was reprinted in 1966 by Something Else Press, run by Fluxus artist Dick Higgins (which helps explain why it popped up in lower Manhattan being read by the likes of John Cage). Since 1995, Dalkey Archive has published the book in a really beautiful edition that doesn’t make the book anymore readable. Even the opening pages are a slog:

Some of the Triple Canopy editors have read the book in its entirety before, which, having attempted to do so ourselves, we can tell you is an accomplishment on par with reading the 900 pages aloud for two days straight.