Vassar College recently ruined the weekends of applicants around the world–by sending out more than 70 mistaken acceptance letters to students who had applied for early decision admission. Students from Singapore, Tunisia and the U.S. all went through something of a roller coaster ride due to a basic clerical error:

Jeff Kosmacher, a spokesman for Vassar, said on Saturday that a “test letter” that had been intended as a placeholder for the real admissions decision had not been replaced before students checked their application statuses online. The error was discovered around 4:30 p.m., he said.

By the time the error was found more than 100 students–some who had actually been admitted–had seen it and they didn’t take Vassar’s excuse of a system error very well at all. After all, as student Dylan Leggio told the New York Times, his “mom called, like, my entire family.” A call she would have to rescind due to Vassar’s error.

The college has told the irate and rejected that they can contact the Admissions Office on Monday. If you answer the phones for Vassar’s Admissions Office, Monday might be a good day to come down with the flu. 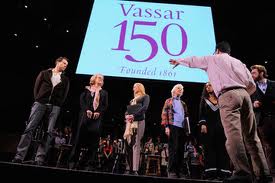