The 21st District assemblyman was the universal GOP choice to succeed the late Alex DeCroce as Assembly Minority Leader.

The Readington Township Committeewoman beat rival Bill Spadea 3-1 in a special Republican convention for the 16th District Assembly seat. Simon will run on the line in a June Primary as the incumbent.

It’s not over, but the widow of Assembly Minority Leader Alex DeCroce locked up nearly every conceivable GOP endorsement this week as she heads toward a Jan. 24th convention showdown with former Kinnelon Councilman Larry Casha.

In his contentious tilt with U.S. Rep. Bill Pascrell, the 9th District Congressman locked up the endorsement of the SEIU New Jersey State Council.

The State Democratic Party chairman this week received unanimous backing for another term as the party’s statewide political leader.

The off-duty state trooper successfully resuscitated a 79-year-old woman who had collapsed at a rest stop at a New Jersey Turnpike.

In his State of the State address the governor again signaled his desire to demolish NJEA sacred cows, including teacher tenure, meaning at the very least a costly, enervating battle.

Billed this month for an additional $21 per employee in 2011 federal unemployment tax as a result of the state’s failure to pay back a $1.7 billion loan from the federal government, they will end up forking over more than $80 million.

The New Jersey Chamber of Commerce snatched away the U.S. Senator’s microphone in time for next week’s chamber trip, installing Gov. Chris Christie as the event’s lone speaker.

The renegade Republican says he’s just getting started in LD16, and didn’t have any hopes of winning a convention this week anyway, but he did nonetheless get beaten by Readington Committeewoman Donna Simon. Next stop: GOP Primary.

In another blow to Texas, Perry entered the presidential race as a two-fisted tough guy and left the contest this week as a gaffe-addled punch line. Just before Perry announced his candidacy late last summer several establishment Republican figures quietly liked what they saw and expected at least a flirtation with Perry. But nothing materialized, as Gov. Chris Christie’s closest political allies shut down all efforts by Romney competitors to gain any traction in the Garden State. 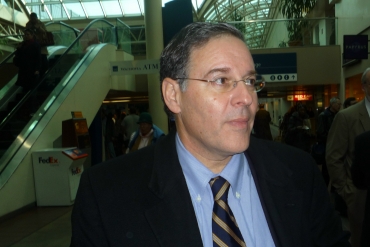