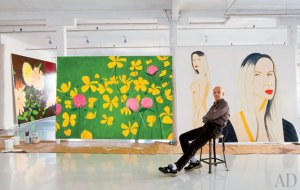 What does Alex Katz’s Soho loft look like? Architectural Digest went to the  figurative painter’s home and brought back the answers. White walls, mostly. High ceilings. Unbelievable spaciousness. A vintage scroll-arm sofa. And plenty of Mr. Katz‘s own sprawling colorful canvases, including a new double portrait.

We wouldn’t expect Mr. Katz (whom The Observer profiled in October) to create his masterful works in anything less than a palatial light-filled studio. Nor were we that surprised that Mr. Katz takes pensive breaks with a certain relaxed elegance: we saw his J. Crew spread in 2009.

The artist has a Picabia portrait in his kitchen and a de Kooning nestled in between his oils and his works painted on cut aluminum—which made us recall a 2006 video in which he says that he aimed to create work that, when placed beside a de Kooning, would “really give it a bounce.” He’s a master of the bounce. In the same video he declares, “A little painting of mine next to someone else’s painting will usually destroy it.”

Also, it appears that he drinks tons of Medaglia D’Oro Italian espresso, judging by the cans in which he places his brushes.