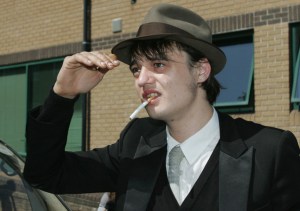 Pete Doherty has a show in London of canvases painted with his own blood. Considering the substances the musician has allegedly ingested over the years, we’re pretty happy to be observing said blood from across the Atlantic.

Reuters has the scoop on the show at Cob Gallery, which is called “On Blood: A Portrait of the Artist.” They inform us that aside from Mr. Doherty’s blood, the exhibition also displays the blood of some of his friends. Amy Winehouse made a self-portrait; Alize Meurisse, who did the cover artwork on Mr. Doherty’s solo album, blood-painted the musician Peter Wolfe; Charlotte Gainsbourg made a scene called “Leet Strife.”

Reuters, in what is probably the understatement of the year so far, mentioned, “There may be something gruesome or just plain morbid about painting with blood.”

There is also this encounter with Kate Moss’s ex-boyfriend and the former frontman of the Libertines:

Suddenly, the man himself breezes in, looking quite relaxed in a tweed suit and Gavroche style leather cap, softly singing the old Beatles song ‘All you need is love.’

He will not take questions but graciously signs prints and posters and poses for photographs with fans before dashing out.