NYPD Detective Kevin Herlihy was shot in the left arm at about 4:15 this afternoon while tracking a shooting suspect in Harlem. Detective Herlihy is in stable condition at New York Presbyterian Hospital and is expected to return home tomorrow. This evening, Mayor Michael Bloomberg held a briefing at the hospital where he gave an update on Detective Herlihy’s condition and called on Congress to do more to enforce gun laws.

Mayor Bloomberg, who said he had just visited Detective Herlihy in his hospital room, reminded the reporters at the briefing that this was the city’s third police shooting in the past two months.

“The three shooters have at least one thing in common and that is that they possessed their guns illegally, and that is true for nearly every shooting that occurs in our city,” Mayor Bloomberg said. “As long as federal laws allow guns to flow onto our streets, criminals will be able to get them and police officers will be in danger.”

“My one birthday wish, beyond a full recovery for Detective Herlihy, would be for every member of Congress to join me here today and look into the eyes of Detective Herlihy and his wife Adrienne and explain why Washington isn’t doing more to prevent shootings like this from happening.”

NYPD Commissioner Ray Kelly joined Mayor Bloomberg at the briefing to provide details on the shooting. Detective Herlihy was wounded by a man named Michael McBride who was a suspect in the shooting of a young woman, which occurred in Queens yesterday. Mr. McBride exchanged fire with Mr. Herlihy and was hit in the chest. He subsequently died while at Harlem Hospital. According to Commissioner Kelly, Mr. McBride had “an extensive arrest history” and was on parole for robbery.

“Our police officers constantly put their lives on the line so that the rest of us can go about our business and we’ve just got to stop this craziness of having more guns than people in this country. It’s just intolerable to have people on the streets of big cities who are not allowed by federal law to buy guns, but obviously have easy access to them,” Mayor Bloomberg said.

The mayor went on to give examples of the federal government’s weakness on gun laws.

“People that are not allowed to buy guns are those that have psychiatric problems, criminal records, drug problems, or are minors. And the federal government passed those laws, but then they don’t do anything really to enforce them. There are too many ways around them,” Mayor Bloomberg said. “You can buy guns privately, you can buy guns at gun shows, there are unscrupulous dealers, a few of them, but some that don’t bother to do the background checks. And the federal government has continuously been unwilling to fund ATF so that they can do the work that they are supposed to do, or to make all agencies report to the master file that you’re supposed to check when you do a background check.”

During his ten years in office, Mayor Bloomberg has made getting illegal off the street one of his top priorities. In 2006, he formed the Mayors Against Illegal Guns campaign along with Boston Mayor Thomas Menino. This month, Mayor Bloomberg and Mayor Menino starred in a Super Bowl ad promoting the campaign.

Mayor Bloomberg plans to spend the rest of his birthday evening visiting a homeless shelter and having dinner with his daughters, but he said the shooting of Detective Herlihy would still be on his mind.

“I’m going to the Bowery Mission after this to say hello and then going out to dinner with my daughters, but I think what we’ll talk about at dinner tonight is exactly what I see up here,” Mayor Bloomberg said. “I’ll try to explain to my daughters that there are men and women who are devoting their lives to keeping us safe. And they probably dont think very much about it, that’s the good news, that because of the worlds greatest police department, most of us don’t have to think about it, but thank god there are some people who do do that.” 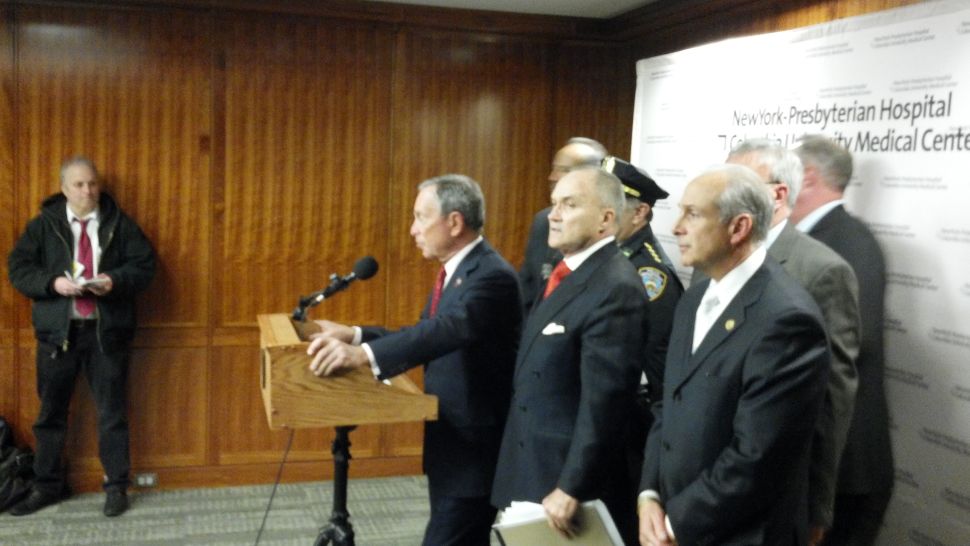