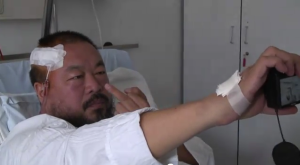 The award-winning documentary on international artist and dissident Ai Weiwei, Ai Weiwei: Never Sorry, directed by Alison Klayman, is scheduled to be released this summer by Sundance Selects, which made an announcement via Twitter yesterday.

The summer release is intended to fall in line with Ai Weiwei’s first trip outside China. The artist was arrested last April on charges of tax evasion and detained by Chinese authorities for 81 days, only to be released with a tax fine of some $2.3 million, and held on house arrest until this summer.

The film explores the “inside story” of the outspoken artist who became a global phenomenon when he put his life on the line and began revealing facts about the 2008 earthquake that the news was refusing to reveal. Since then he’s been avidly blogging and Tweeting his views connecting himself evermore to the international community.

“Do you think you’re becoming a brand?” Mr. Weiwei is asked in the film’s trailer. “Yeah,” he replies. “It happened to be. Brand for liberal thinking and individualism.”

The film, which made its debut at the 2012 Sundance Film Festival, where it was awarded the Special Jury Prize for Spirit of Defiance, documents Mr. Weiwei’s international shows, like the Munich exhibition “So Sorry,” as well as protests that Ms. Klayman attended and filmed, such as the “1,001 Chairs” event in New York. While the film covers his detention and the surrounding story, it was begun three years ago.

“The movie is about these last three years, you know,” Ms. Klayman told The White Review in an interview she did during post-production for the film, “and the last three years he has not been a political detainee. But I’m just grateful that I’m in a position to keep his story in people’s minds, since I spent enough time with him that I think I have a really good feel for him.”