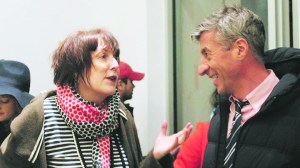 “The secret,” Maurizio Cattelan said, standing in a nearby garage as people crammed into his Fiat-size gallery Family Business this past rainy Thursday, “is to make the space very small. Then when people show up, the crowd looks very big.”

But the crowd was big for the gallery’s inaugural “Virgins Show,” curated by the artist Marilyn Minter and featuring works by her students at the School of Visual Arts. Patrons waited in the rain for their turn to make a brief U around the space, which featured three portraits of Jon-Benet Ramsay, a pair of painted pantyhose, and balloons on the ceiling with cursive crayon utterances from the end of a relationship (e.g., “My bad”), among other works. More-established artists (“born-again virgins”) cycled on a video screen—Laurel Nakadate sang “Happy Birthday,” and Patty Chang sawed at melons placed strategically in her bra.

“It’s true!” said Ms. Ruilova, smiling widely in a black poof coat. Her boyfriend, the artist Raymond Pettibon, had scraggly gray hair that matched his goatee and was wearing a houndstooth jacket and a frown.

“I think it’s kind of a rebellion against academia,” she said of their brandishing brushes. “They all know theory, but they hate it.”

Mr. Cattelan and his co-owner, New Museum associate director Massimiliano Gioni, seemed reluctant to steal Ms. Minter’s thunder—at one point Mr. Cattelan even grabbed Gallerist’s pen to scribble himself off the record—but when the affected nonquotation became too much of a strain, Mr. Cattelan tapped Mr. Gioni and pointed to the journalist interloper.

“Oh, yeah,” Mr. Gioni said, recalling a prepared quote, and he turned to us as Mr. Cattelan joined in. “We take out contracts on artists, not for artists.”

Mr. Pettibon stood outside in the rain, still frowning.