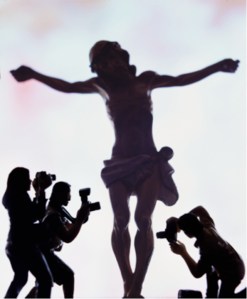 Piss Christ photographer Andres Serrano’s new series “Anarchy,” debuts next month at the Armory Show at Edward Tyler Nahem Fine Art’s booth. The photographer is returning to photographing figurines, as he did in his earliest work, though with a new subject: war. The Hanging shows a figurine hanging from a tree, while Level of Disobedience has a hooded man being held up at gun-point. “It’s disconcerting because the toys are not necessarily playing nice,” said Serrano. “They allude to death, war, disaster, confusion and abomination. But children don’t really play nice with their toys when they bash them or instruct them to kill.”

Serrano calls the series his “new Immersions,” referring back to that controversial urine photo, which had a crucifix dipped in the fluid. And while “Anarchy” seems as charged as any of his earlier work, Serrano denies that he’s courting controversy. “I’ve never created controversy intentionally,” he said. “Everyone has their own interpretation of what barriers should or should not be crossed.” But even he revealed a sensitivity to boundaries by excluding one image called Teddy from the Armory show. Read our full Q&A with Serrano below to find out more about the show and why he thought Teddy might be “too strong” for the Armory crowd.

Gallerist: You used figurines in your early work such as Piss Christ, and then later turned to doing portraits such as with homeless people for your series “Nomads,” Klansmen in “The Klan,” and even dead bodies at the morgue in “The Morgue.” In your new series “Anarchy,” we see a return to the use of figurines. Why did you make that choice?

Andres Serrano: I often work from one series to another. When I begin a series, I only know where I want to start but I don’t know where I’ll finish. By the time I’m done, I can sometimes see the direction of the next body of work. “Anarchy” was developed soon after I finished a series called “Holy Works.” I started “Holy Works” with people posing in costumes in my interpretations of religious painting. Toward the end of “Holy Works,” I was no longer photographing people but figurines in silhouette. Germano Celant has called these pictures “sublime shadows.” I call them my “new Immersions.” The “Immersions” were the series of figures immersed in piss and other fluids done in the late eighties of which “Piss Christ” is the most famous example. “Anarchy” is an extension of those “sublime shadows” but with a different intent.

Gallerist: Your work almost always seems to gain some of its power from the ability to create dissonance and surprise in the mind of the viewer by subverting our expectations. Here we have toys composed in very serious scenarios. One figurine is shown hanging from a tree (The Hanging), or a man in a hood is held up at gunpoint by a young woman (Level of Disobedience), when we expect to see toys conveying a sense of amusement or triviality. But it’s as if we’re viewing images of people.

Gallerist: How did you come up with the scenes you depict in this series? How did you know when you were done with a photo?

Serrano: I like to explore the known and the unknown, all within the same picture. Taking things out of context puts them in a new context. In “Anarchy,” I used the objects of childhood in a way both familiar and disconcerting. It’s disconcerting because the toys are not necessarily playing nice; they allude to death, war, disaster, confusion and abomination. But children don’t really play nice with their toys when they bash them or instruct them to kill. “Anarchy” can be read as social-political, but I see it as mostly psychological. I think the most dangerous anarchists are not the ones with a social agenda but the ones without any. They are the free thinkers who think outside the box. Many are in jail, or insane asylums but some are in Hollywood and in the art world. I know when I’m done with a picture when I see something I like, but I don’t always know when I’m done with a series. And you’re right, these figures became people even to me once I saw the large prints.

Gallerist: It seems inherently less difficult, or potentially less powerful, to work with figurines and toys than to work with people. But that’s not always the case, since Piss Christ, one of your most controversial and moving pieces, was also created with a statuette. When working with inanimate objects, how are the challenges different from those that you would face when doing portraits or otherwise working with people?

Serrano: I like working with people and I like working with inanimate objects but I can’t say one is easier than the other. I had a hard time working with the figurines sometimes, particularly when I had to alter them or make them do strange things like “suspend” them in air as in Alice in Wonderland. In this picture, Alice, as well as the soldiers shooting at her are all suspended on a piece of Plexiglas with the use of glue and clay. Not only did I have to make sure everyone was placed correctly I also had to wipe the glue off the Plexiglas. In American Monument on the other hand, I purposely let the glue drip over the mountain of soldiers which gives it a glistening viscosity like pre-seminal fluid. The challenge may be different but the power of the symbols, whether human or inanimate, can be the same or even more perverse since we don’t expect such transgression from toys.

Gallerist: You’ve said about your work with the “Morgue” series, “Some people would like to see this remain hallowed ground, a place where we don’t trespass.” I feel like that could be said of most of your work, that it trespasses on ground that while not always ‘hallowed,’ is nonetheless untouchable. Did you feel like you were exercising a similar “trespass” with this series? And if so, on what “hallowed ground”?

Serrano: I don’t really know what hallowed ground is. I know everyone has their own interpretation of what barriers should or should not be crossed, or what the moral parameters are. When Rick Santorum questions the president’s Christianity or when Bill Clinton said he did not have sex with Monica Lewinsky, it’s really a matter of interpretation. I explore the things that are of interest to me and hopefully, things that have not been looked at in the same way I look at them. There’s an image in “Anarchy” called Teddy which shows a small figure of a man masturbating to a giant teddy bear. Both the man and teddy bear are smiling. It’s not in the show because maybe it’s too strong for the Armory.

Gallerist: Is there any other sacred territory on which you would like to trespass as an artist?

Serrano: I don’t use the word trespass in exploring new ground because it implies I’m not supposed to go there. I don’t see things that way. If I’m meant to go somewhere, I’ll go. Did Rosa Parks “trespass” or cross the line when she refused to give up her bus seat for a white passenger? I don’t think so.