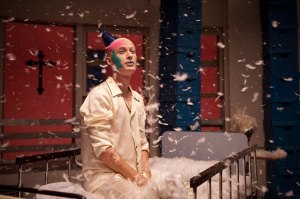 Of the many things we saw today in homage to Andy Warhol, on the anniversary of his death 25 years ago, the one that rose above them all was Andy X: A 40 Minute Screen Seance with Andy Warhol, a 2012 musical by director Jim Sharman, who directed The Rocky Horror Picture Show. “It’s a poetic exploration of Warhol,” said Sharman in an interview with Pages Digital, “not a biopic.”

The film begins with a nude man, Akos Armont playing both Warhol and a street artist, singing to himself in the mirror and continues with a fun romp through various sequences that include characters playing Basquiat (boxing playfully), Valerie Solanas (chasing Warhol), Billy Name (looking cool in dark glasses) and even Warhol’s mother (singing about making him Campbell’s soup), with much religious iconography, naturally.

The film was released online today and was planned to be released at the precise moment of Warhol’s death, 10:21 p.m. EST (though we watched it before that time, online).

“Warhol is famous as a pop artist,” said Mr. Sharman in the interview about the timing of the release, “but, in his last years, Andy Warhol painted over ninety giant canvasses based on Leonardo da Vinci’s Last Supper, the greatest religious artwork by any American artist. He then checked himself into hospital for routine surgery but died neglected because his nurse fell asleep reading her Bible. For someone who began as a Byzantine Catholic in Pittsburgh and was something of an iconographer of secular saints, that’s an eerie ending. It was the start-point of ANDY X and the date has some significance for us.”

Explaining what inspired him to make the film, Mr. Sharman said, “It was a logical development from a previous collaboration with writer Stephen Sewell and composer Basil Hogios—Three Furies—about the painter Francis Bacon. It was a provocative stage work that played arts festivals around Australia to critical and popular success. Around this time, GoMA (the Gallery of Modern Art) opened in Brisbane with an impressive Warhol retrospective and that exhibition further inspired what was our already considerable interest in Andy Warhol.”

While it didn’t do much to illuminate the character of Warhol for us, it’s is a strange and amusing moment in the canon of tributes to Andy Warhol. And, at only $6.99, a deal!

Thanks to The Guardian for bringing it to our attention.