Wikileaks will hold a press conference Monday at 12 p.m. in London to discuss its “Global Intelligence File.” The “File,” which the whistle-blowing site claims comprises over 5 million Anonymous-hacked emails from Texas-based Stratfor, contains a great deal of what appears to be highly sensitive information regarding Stratfor’s sources, how they pay sources and their operating techniques in general. One document circulated among Stratfor staff in 2007 may be of particular interest to the company’s customers, as its plain-spoken language appears to reflect an internal attitude toward Stratfor clientele as well as several federal agencies that was obviously never intended for public consumption. It also implies (perhaps jokingly) that Stratfor was willing to do extralegal work to covertly gather information.

The Microsoft Word doc is titled “The Stratfor Glossary of Useful, Baffling and Strange Intelligence Terms.” The author–not identified in the file’s metadata–succinctly introduces the list of terms and definitions: “Every profession and industry has its own vocabulary. Using baseball terms to explain a football game is tough. These are some of the terms we use.”

The following is just a selection of the terms and definitions that could further complicate Stratfor’s already sticky situation. Some are so bluntly-worded they raise the possibility that this was some kind of internal joke:

ATF Alcohol Tobacco and Fire Arms. Rednecks with a license to kill. Never, ever, ever ask for their help on anything.

Background Check Check of history of someone to determine reliability. Usually meaningless. A perfect credit rating does not mean you aren’t devious scum. Does run up the client’s bill and makes it appear that you are busy. Clancy move. Pros run tests. [Ed. The same document later states that a “Clancy” is “Somebody who has read a lot of Tom Clancy novels and thinks he knows the Craft. Total moron. Really dangerous if he is the Customer. Never let a Briefer be a Clancy. “]

Black Op If you heard even a hint of it, it ain’t black. Anyone who tells you about a black op is a liar. Does Stratfor do black ops? You’ll never know.

Brief the Times When the Briefer has obtained zero valuable intelligence from analysis, he finds something in the inside of the morning paper, powers up a view graph, and “Briefs the Times.” Customers are frequently impressed. It’s a hoot.

CIA Appetite/Botswana budget A customer with limited resources asking for enormous amounts of intelligence. Defines most of Stratfor’s customers.

FBI Federal Bureau of Investigation, aka the Downtown Gang. Very good a breaking up used car rings. Kind of confused on anything more complicated. Fun to jerk with. Not fun when they jerk back.

Green-carder A source working for you because he believes that you will take him to America where he will own a Seven-Eleven. Try not to disabuse him until after you’ve squeezed his sorry ass.

Secret Service They catch counterfeiters, break up child pornography rings and guard the president. Continual identity crisis. Very nice people. Not, shall we say, the most sophisticated crew you’ll ever find.

The glossary in full may be an additional embarrassment for Stratfor, but Wikileaks appears to promise there’s much worse to come: “Like WikiLeaks’ diplomatic cables, much of the significance of the emails will be revealed over the coming weeks, as our coalition and the public search through them and discover connections.” 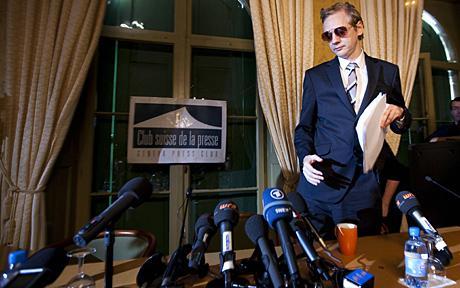