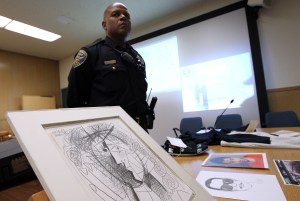 The recovered Picasso drawing, and a policeman. (Photo courtesy of Getty Images)

Mark Lugo, the Hoboken, N.J., wine steward who made headlines over the summer when he walked out of the Weinstein Gallery in San Francisco with a Picasso drawing this past July, was today sentenced to one-to-three-years in prison for his crimes in New York.

Lugo completed a 138-day sentence for his California crimes this November, then headed to New York to be sentenced for his thefts here, which included a Fernand Leger from the Carlyle Hotel, on loan from the Helly Nahmad Gallery. Lugo kept all the spoils of his low-key thefts in his apartment and, according to the AP, only said, “I’m sorry,” at his sentencing.

Lugo’s lawyer, James Montgomery, noted Tuesday that Lugo had “no commercial motive” in the thefts.

“His interest in these things was aesthetic,” Mr. Montgomery said.

Lugo could be out of prison in six months, following a rehabilitation class.