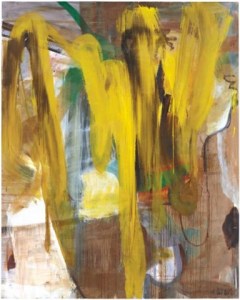 At Sotheby’s estimate-beating sale in London last night, Gerhard Richter grabbed plenty of attention, with six of the artist’s paintings making almost $30 million. But pieces by two of his fellow countrymen, Albert Oehlen and A.R. Penck, fared well also, setting artist records (with a tiny asterisk in the case of Mr. Penck).

Mr. Oehlen, who recently joined the Gagosian gallery, had a large untitled 1989 abstract painting bid up to £445,000 ($699,528), good enough to beat his earlier record, $698,500, by a little more than a thousand dollars. That record was set last November at Sotheby’s New York for the identically sized, more manically colored Embraceable You (1994). (All auction information comes from the Artnet price database.)

Meanwhile, an early Penck, Methode, Fertigzuwerden (1965)–showing one of the artist’s trademark nude stick figures painting on canvases held aloft by tiny stick figures–sold, with buyer’s premium, for £325,250, a record, in sterling pounds, by a wide margin: the previous record was £252,500 for the enormous 1973 work Standart, back in Oct. 2007. However, given the dismal state of the pound, last night’s sum was actually less in dollars than that previous record holder, $510,997 to $514,361.