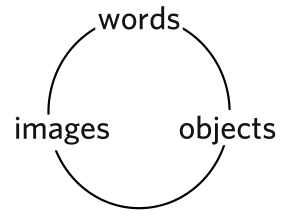 From the press release for Antoine Catala's "I See Catastrophes Ahead," which runs at Canal 47 through March 25. (Courtesy the artist and 47 Canal)

Antoine Catala’s first show at the gallery 47 Canal is called “I See Catastrophes Ahead.” It has one of those press releases that made us feel like we had to figure out what the hell was going on. The text would be staggeringly bleak, if not for the fact that certain words—instead of being written out—are illustrated with kitschy clip art that looks like it came straight out of Windows 95. Earlier this week, we stopped by the gallery and saw Mr. Catala, who presided over a messy room in the midst of installation, with wires and flat-screen televisions and mirrors strewn about the room.

“The whole show is a walk-in rebus,” he said in a thick French accent. “Every object in the show is an element of the sentence, ‘I See Catastrophes Ahead.’ For instance: if you take ‘catastrophes,’ you get a cat, an ass and some trophies. So that’s the cat,” he said, pointing to a corner where the red plastic mold of a cat’s body, missing the head, sat inside a frame, the top of which was a flat-screen television whose screen was facing a mirror. He turned the TV on and the spinning head of a cat projected atop the body. The way the mirrors were situated made the whole figure look like it was floating in space.

“It’s basically the most antiquated way of doing holograms,” Mr. Catala said. “A haunted house type thing.” He turned to a work table and produced a clear plastic mold of a lower torso. “This is the ass,” he said, taking the two pieces and closing them around a Mac mini, which is loaded with projections for other works in the show.

In another corner was a projector on a custom-built stand facing what looked like a small rectangular canvas with the image of the back of someone’s head printed on it. It was all rigged up with a complex series of wiring. Mr. Catala flipped a switch and the contraption began making a noise like a respirator. It turns out the canvas was a sheet of latex stretched over an airtight chamber—which was shaped like a lowercase “a”—and the machine was sucking air in and out of it. The flow of air produced two different impressions in the latex alternately: first the “a,” then the bulging of the back of the head.

The idea for the machine comes from Chris Harrison, a scientist from Carnegie Mellon who works with pneumatic tactile technology, and whose work Mr. Catala has been studying. This same process was used to produce images of trophies onto another latex canvas on the other side of the room. A hologram similar to the cat showed a car spinning on a close-up image of ice—an icy road. So: Icy cat ass trophies a head.

Mr. Catala, who had his first solo show in New York at 179 Canal, the former space of the proprietors of 47 Canal, studied mathematics at school in France before moving on to a fine arts degree in London. While a student, he got some attention for organizing a show at the local Burger King where he’d sometimes go to eat.

“There were posters of artists on the walls,” he said, “Like cheap Ikea posters with plastic frames. And I had the thought one day, if I’m here in 50 years, will the posters will be updated? And will the people doing art then be happy to be on posters in the Burger King? So I contacted Burger King and asked them to do an exhibition where I replaced the posters of Klimt and Matisse and Picasso with contemporary artists.”

The show was two doors down from Whitechapel Art Gallery and it became a hit. People would stop by the Burger King on the way there and see the show while the people who came to eat Whoppers didn’t really know what was going on.

“At one point,” Mr. Catala said, “There was an exhibition of Gilbert and George at Serpentine Gallery, and a whole bus of Japanese art students stopped at Serpentine and were then on their way to Whitechapel. But they were too early. Whitechapel was sealed shut. But the clerk at Serpentine had told them, ‘If you have time to kill, I really recommend you go check out this show in the Burger King.’ So a whole bus of Japanese art students stopped into the Burger King and the teacher started to give a lecture on contemporary art. The franchise owner happened to be sitting in the Burger King when he saw this happening, and he stood up and gave this whole speech about how Burger King is a sponsor of the arts.”

“I like changing the context of things,” he added.