TRENTON – Gov. Chris Christie said today news reports exploring the potential for a brokered GOP presidential nominating convention are nothing but hype and doubled down on his support for former Massachusetts Gov. Mitt Romney.

The prospect of a brokered convention, in which no candidate has the delegates necessary after the primary season, has been explored several times as the GOP nominating process continues to drag on.

“That stuff that folks in the media and political punditry like to talk about…hasn’t happened in the Republican Party since Wendell Wilkie,” he said.  “I don’t think it’s going to be happening in 2012.”

As he has since first endorsing Romney last October, Christie said he’s confident that when the smoke clears, Romney will have defeated all challengers.

“I’m completely confident that when we get to Tampa in the last week of August that Mitt Romney will have secured the sufficient number of delegates to be the nominee of the party and that we’ll be down there listening to his vision for America as he gets ready to take on the president in the fall elections,” he said.

A grinding primary is the result of the GOP’s new nominating rules, Christie said, in which states may award delegates on a proportional basis, rather than winner take all. With each candidate securing a small number of delegates in every primary, the race to 1,144 is at times meandering.

“The rules are working the way the rules were intended to work by the folks in the (Republican National Committee),” Christie said, adding that New Jersey voted against the adoption of the plan.  “I didn’t think it was the right thing for us to do as a party, I think we should have stayed winner take all. I think a lot of people who voted for these rules are starting to have second thoughts about it now.”

Santorum has picked up momentum of late on the strength of wins in two state caucuses and a primary. Recent polls show Santorum gaining ground on Romney and even leading in some polls, giving rise to the talk of an eventual brokered convention. 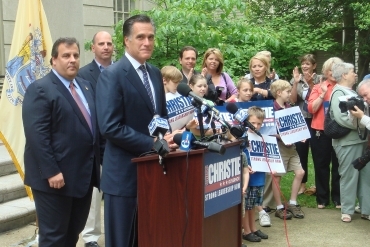