A small group of protesters and a pair of pups inspired a media frenzy in front of the Westminster Kennel Club dog show at Madison Square Garden today. The demonstrators were assisted by the liberal political consultancy Americans United for Change under the umbrella of the group, “Dogs Against Romney,” which was created after the Boston Globe published a 2007 profile of the perennial Republican presidential candidate revealing he put his Irish Setter, Seamus, on the roof of the family station wagon for a twelve hour road trip from Boston to his vacation home in Canada.

A press release announcing the “Dogs Against Romney” protest promised a pack of ” passionate canines and humans,” however, when we arrived at Madison Square Garden shortly before the demonstration’s appointed noon start time, there were only two protesters carrying signs reading “Mitt is Mean” and “Dogs Against Romney.” Nary a dog was in sight, but the media was out in force. We spotted more reporters than we could count including representatives from the Huffington Post, Gothamist, Daily News, CNN’s “off-beat” correspondent Jeanne Moos and, of course, the Observer.

One of the protesters, Veronica Cedeno, told us she has an eight-week-old Scottish Terrier at home, that was too young to bring to the demonstration.

“I feel like I have to do this because it’s just not right to treat a dog like that,” Ms. Cedeno said.

Nearby, we spotted a man named Paul Getsos calling for reinforcements on a cell phone.

“Do you know anyone with dogs in the Midtown area? Because I’m doing this Dogs Against Romney protest,” Mr. Getsos said into his phone.

Mr. Getsos told us why he thought Seamus’ story should be a major issue in this year’s campaign.

“I think it’s a character issue and just a question about decision making,” Mr. Getsos said. “I mean, it’s mean. it’s weird, it’s just, like, unreal. If he treats a loving pet like that how is he going to be empathetic? He lacks empathy, a president needs empathy.”

Seamus’ story has dogged Mr. Romney throughout this election as well as his 2008 campaign. Mr. Romney  has repeatedly insisted his dog enjoyed traveling on top of the car and his Ann, has said Seamus survived the trip and went on to live to a “ripe old age.” However, last month, The Politicker reported two of Mr. Romney’s sons had an off-record conversation with reporters where they revealed the dog ran away when they reached their destination on that infamous journey. Mr. Romney and his campaign didn’t respond to multiple requests for comment on that story.

Though Mr. Getsos described the dog issue as a “significant problem,” he said it was “the least of the problems” with Mr. Romney.

“The problem I have with Mitt Romney is he has no policy options,” Mr. Getsos said. “He’s talking all about these issues that are nothing about policy or politics, it’s all about character, you know the fact that he’s married to his wife. But it’s like, this is a character issue. If you’re going to run on your character then, you should be attacked on your character.”

Eventually, a pair of protesters with dogs joined the demonstration including a bull terrier and “Sake,” an eight-year-old pug who rode in her owner, Tate Hausman’s, backpack.

“We live in Brooklyn, but she comes to work with me on 27th Street,” Mr. Hausman said. “She travels safely in the backpack.”

After about twenty minutes, we left the protest. By that point, there were about ten protesters, the two dogs and more reporters than we were able to count. 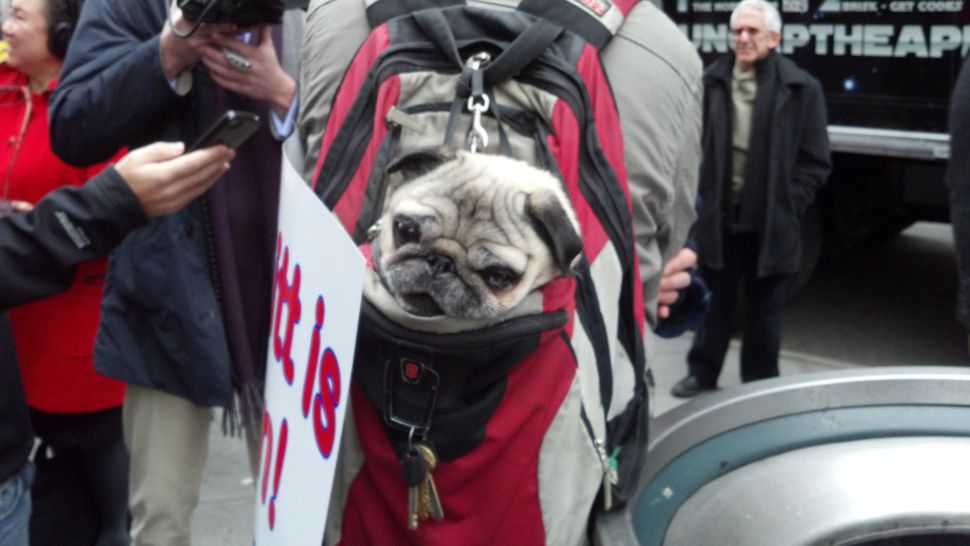