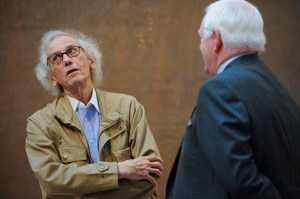 Artist Christo speaks with Earl A. Powell, director of the National Art Gallery at a press conference in 2011. (Photo courtesy of Getty Images)

The New York Times reports today that Christo’s project Over the River, a work that would cover a portion of the Arkansas River in Colorado with fabric, ala Central Park’s The Gates, has been met with another bureaucratic hurdle, and will now be staged in August 2015 at the earliest.

Uncertainties involving construction and permits made the delay necessary, but the continuing dialogue with Colorado residents was also a factor, the Over the River organization said Tuesday in a statement.

A spokeswoman for the main opposition group, called Rags Over the Arkansas River, known by its acronym, ROAR, said the delay would allow more time to marshal evidence, including the impact on bighorn sheep and other local wildlife, that the group says was underestimated by federal land managers.

The artist has now been working on the project for over 20 years.