Senator Chuck Schumer predicted Democrats at all levels of government will emerge victorious against Republicans in this year’s elections during his speech last night at the gala scholarship dinner that closed out the annual New York State Black, Puerto Rican, Hispanic and Asian Legislative Caucus association weekend in Albany.

“The tide is beginning to turn, these hard right, nasty people who only care about the people at the very top, well, we peeled back the curtain and the American people are seeing who they really are,” Mr. Schumer said.

Mr. Schumer began his remarks by thanking State Senator and potential Congressional candidate Adriano Espaillat for a giving him a “Linsational” introduction.

“Let me say Adriano, that was Linsational and the Knicks beat the Mavericks today just like we’re all going to win in November!”

Senator Schumer went on to describe why thinks things have changed in Washington since the Republicans swept the 2010 midterm elections.

“The election occurred in 2010, the Republicans thought–the hard right, Tea Party Republicans thought they had the upper hand. … The Republican leader of the Senate said he had one goal, one goal; to defeat Barack Obama, and they tried for months and months and months to block everything the president and we tried to do to help the average working person, to help the average middle class person,” Mr. Schumer said. “Their goal was to obstruct, their goal was to try and block everything, but have no fingerprints. And they were beginning to succeed.”

According to Senator Schumer, the Republicans’ obstructionist efforts were stopped because “a group of us raised our voices and a group of us exposed what they did.”

Because of these efforts, Mr. Schumer predicted a big win for President Obama and other Democrats in Washington.

“Barack Obama is going up in the polls, the Democrats in the Senate and the House are going up in the polls. We are shwoing the American people whose side we are on and I predict to you tonight that we will, by a larger margin than anybody thinks, re-elect President Obama,” he said.

Senator Schumer ended his speech by encouraging President Obama to continue opposing Republicans in Congress and vowing to support those efforts.

“We in the Senate, we Democrats, the Democrats in the House led by Dean Rangel and all of us who are people who care about average people, say to the president, ‘Fight them hard, don’t turn your back,’ Mr. Schumer said. “Fight them hard and we will have your back Mr. President. … We will have a great victory in November of 2012. God bless you, God bless the Caucus and God bless the United States of America.” 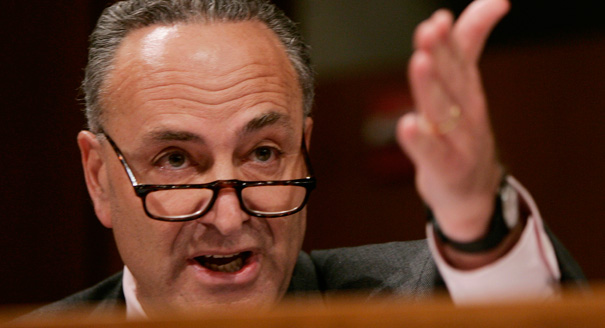