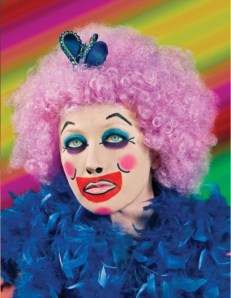 A photograph by Cindy Sherman for M.A.C.

If you happen to pick up a catalogue for Cindy Sherman’s retrospective at MoMA, be sure to check out the interview with director John Waters on page 68. As Ms. Sherman is a sartorial chameleon and Mr. Waters a king of kitsch, it was maybe inevitable that they would land on the topic of thrift stores, and Ms. Sherman reveals that, like most people, she’s had trouble finding anything good in New York’s second-hand shops.

cs—I would go to a Salvation Army and look for certain kinds of costume-y things. But so much of it was junky stuff. I would rip up a pair of pants and use the legs as sleeves for some other kind of garment that looked like brocade from the seventeenth century. But it was just some cut-up pieces of fabric.
jw—New York must be the worst city to go thrift shopping in, because everybody knows everything, even at the Goodwill. Do you have secret places where you find stuff?
cs—Online, actually. I got some of the clown stuff on eBay, but it wasn’t real clown stuff—it was for square dancing.
jw—When you travel, do you go to thrift shops?
cs—Not so much anymore.
jw—Do you go to costume-rental places?
cs—No, I’ve never done that.
jw—Never? Every one of those historical costumes you found in thrift shops?
cs—About a third of that series was shot when I was in Rome. The woman who owned the studio was related to the Borghese family, and one or two of the outfits were from her family. There’s a Madonna holding a child; that dress was from her family, so that’s the most “real” costume. But they had good flea markets in Rome where I got a bunch of old religious things.

The show opens to the public on Feb. 26.