The relatively-elusive novelist Cormac McCarthy has deviated from his job as novelist from time to time, and whenever he does—whether a rare appearance for press duties on his book, or a project that isn’t a novel—it usually makes a fuss. This one’s no exception. Cormac McCarthy, copy-editor, has emerged, and with him are some strong ideas about punctuation.

The Oprah-approved author of harrowing, sparse-prose mastery such as The Road, No Country for Old Men, and Blood Meridian has taken on a special project in editing the paperback version of last year’s well-received biography of famed scientist Richard Feynman, Quantum Man: Richard Feynman’s Life in Science.

As it turns out, Mr. McCarthy was a huge fan of the book, and offered his services to Quantum Man author Lawrence M. Krauss unprompted. With them, however, he also offered some distinct, Cormac McCarthy-esque adjustments.

“To start with,” Krauss writes, “he made me promise he could excise all exclamation points and semicolons, both of which he said have no place in literature.” The novelist, he adds, “went through the book in detail and made suggestions for rephrasing in certain points as well.”

In the mean time, as a biography of Richard Feynman becomes a tribute to the minimal elements that the man may have lived, that distant tapping sound you hear is the furious deletion of the aforementioned punctuation marks by many an MFA candidate. Previously: Cormac McCarthy, playwright, brute-force killer of euphemistic racial-tension in theater. Hopefully he’ll next emerge on Madison Avenue and tell every menswear fashion buyer in the world why non-effeminate bracelets have no place in their stores. 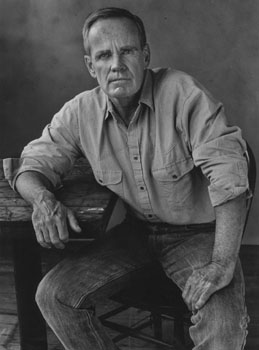