In addition to her @Courtney Twitter account,  sometimes a source of entertainment, consternation and lawsuits, kaleidoscopic rock queen Courtney Love has a second, private and much more personal account on the microblogging site: @Cbabymichelle. “Personal” as in Cbabymichelle is actually written by Ms. Love and not an assistant. According to former Radar Magazine chief and current Fix-meister Maer Roshan‘s new eBook about Ms. Love, Courtney Comes Clean: The High Life and Dark Depths of Music’s Most Controversial Icon, Ms. Love has used the lesser-known account to have barbarically yawping dialogues with her public persona, one online voice acting as a PR-friendly saint to Cbabymichelle’s heckling sinner. Mr. Roshan writes:

Courtney hasn’t shied away from using Twitter to blast her enemies. Last Spring, after she paid fashion designer Dawn Simorangkir $430,000 to settle the world’s first Twitter defamation lawsuit, her handlers implored her to stay away from social media. Love announced that she was quitting Twitter for good. But total abstinence was apparently too much to bear for the singer, who went on to maintain two separate Twitter accounts, which her pals dubbed ‘Good Sister’ and ‘Bad Sister’, after the title of one of her songs. In September of 2011, Love reclaimed the handle @courtney that she’d abandoned years earlier. According to sources close to Love, @courtney was written by a staffer who was instructed to keep up a positive and press-friendly tone. But the real Courtney continued to tweet from a password-protected handle, @cbabymichelle, where she lashed out at a wide range of enemies, from Chelsea Handler to musician Dave Grohl. “So Edward Norton gets to be ambassador to Malawi?” cbabymichelle railed about her former boyfriend last August. “That’s funny, he doesn’t even like Madonna.”

At the same time, @courtney was issuing a daily series of saccharine tweets, begging @kellyosbourne for forgiveness for Love’s attacks on her, heaping praise on casino mogul @ElaineWynn and slathering @perezhilton with “xxoxoxxos” despite his trashing of her over the years. Many of Courtney’s fans were confused by her chipper tune. Courtney was also displeased. Things took a surreal turn last October when Bad Courtney lashed out at Good Courtney for her embarrassing performance. Annoyed by a series of particularly cloying tweets @cbabymichelle chastised her counterpart for “not following the plot” of her life and over-tweeting in a style “that sounds nothing like me!!”

“Look, good Courtney, I know we have to be behaving cause were up for movie roles and people are watching,” raged Love, threatening to replace her alter-ego. “I’ll have you removed at once from doing the celeb-friendly/corporate act if you don’t get your shit together and stop making me look like a fool!” A day later, Bad Courtney’s inflammatory tweets disappeared.

Cbabymichelle was still at it as recently as January 29, addressing the differences between “good Courtney” and Cbabymichelle in the following exchange: 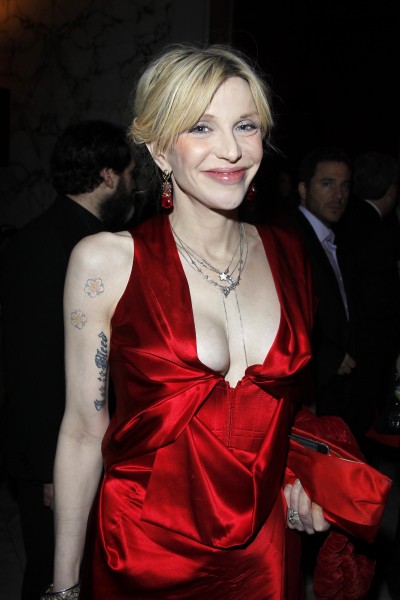