Earlier today, Governor Andrew Cuomo gave his thoughts on the State’s redistricting mess and his forecast for how it will play out on Fred Dicker’s radio show, “Live From The State Capitol.” The governor reiterated his vow to veto the current set of lines and blamed the back and forth bickering on “political theater,” he also explained why he thinks it will all get solved “very, very quickly.”

“This is all, frankly, hypocritical and it’s all political theater,” Governor Cuomo said.

Governor Cuomo said politicians on both sides of the aisle are complaining about the lack of redistricting reform when they haven’t actually done anything to change the partisan nature of the process.

“On the issue of redistricting, it’s just great political theater on both sides,” he said. “The political theater is just all over the place and you have to smile when you hear them, right?” Governor Cuomo added. “The Senate Republicans are outraged. Yeah? Well, they signed a pledge to Mayor Koch, and they just did a 180 on it and, you know, they conveniently have forgotten about that. The Senate Democrats, they’re outraged. When you were in power why didn’t you pass it?”

He also criticized lawmakers who are focusing on his promise to veto the proposed redistricting when they have the power to shoot the lines down in the Legislature.

“You want me to veto a bill, don’t pass the bill you know?” he said.

“The comeback from Speaker Silver, I think, would be, look this is the tradition, we defer to the majority, defer to each house. We kind of have a comity as a result of that,” Mr. Dicker said.

“It’s just coarse, base politics and it’s true on all of their fronts, by the way. So, it’s just Albany capitol theater and, frankly, it’s something I don’t want to engage in,” Governor Cuomo said. “I haven’t engaged in it for 14 months, I’m not going to start.”

Governor Cuomo said he is going to handle the redistricting situation “based on the law,” meaning “it’s going to be primarily, in my opinion, between the Legislature and the courts.”

That being said, he was unequivocal about his plan to veto the current proposed map.

Either way, he thinks the coming elections will force a speedy resolution on redistricting in the courts.

“The court’s saying, ‘OK, looks like an impasse. Now we have jurisdiction to step in.’ So, I think it’s going to really light a fire, and I think the Assembly and the Senate are quickly going to have to come up with Congressional lines, which is then going to mean they’re going to have to finalize the Assembly lines, finalize the Senate lines, put forth the Congressional lines. And that’s going to happen very, very quickly,” Governor Cuomo said. “That’s then going to trigger my involvement and I’ve been clear, send me these lines and they’ll be vetoed, but I think it has to come to a head quickly. Otherwise, the courts will just go forward, as they should, because you have the Congressional elections in 20 minutes.”

Governor Cuomo has good reason to want to see this year’s redistricting controversy resolved in court. Vetoing the lines might compromise his ability to reform the process for the future. 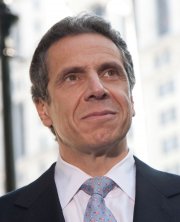