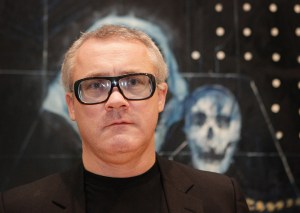 The houses will be built in an area where Mr. Hirst owns 40 percent of the land, so it’s an investment as much as it is a mission to save the world. From the paper:

Hirst’s architect, Mike Rundell, told officials, “As you know, he is a very successful artist and has very high ambitions for this project. He has a horror of building anonymous, lifeless buildings. He wants these houses to be the kind of homes he would want to live in.”

Not that we actually care about any of this, but if the carbon footprint calculator at Terrapass.com is to be believed, a single person generates 2,000 pounds of carbon dioxide through one long flight (i.e. Rome to New York, New York to Los Angeles), so if we assume that each person who completed the spot paintings challenge took at least two long flights each, then the 47 people who have completed it have generated 188,000 pounds of carbon dioxide.