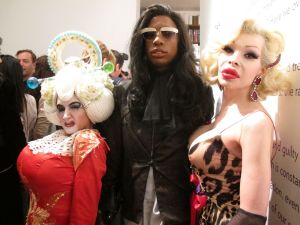 During the opening of David LaChapelle’s new exhibition “Earth Laughs in Flowers” at Fred Torres Collaborations last Thursday, a woman was crying and shaking slightly in the back office. Between sobs, the woman, a photographer named Katrina Eugenia, talked to Mr. LaChapelle who was in a porkpie hat and a striped shirt.

“I’m an enormous fan,” she said after Mr. LaChapelle disappeared, “and I’m just overwhelmed to be here.” She wiped away a tear. Mr. LaChapelle came out with a catalog from the show and wrote a long note to her. “This is Norman Mailer’s son,” she said turning to John Buffalo Mailer, who was in a black leather jacket.

There was a large text written on the wall behind them entitled “Gaia.” It was a blurb purportedly about the “primordial earth goddess,” written in the first person. “Have we poisoned what gives us life?” it asked. “Are we the guilty exploiters, the rapist?” On an adjacent wall there was an enormous photograph of a nude woman covered in moss lying supine on a grassy landscape clutching a sprig of pink flowers by her crotch. She looks either dead or in ecstasy, it was hard to tell.

The opening was for a series of still lifes of flowers and human detritus by Mr. LaChapelle, a new turn for the photographer who is known for his racy, garishly colored fashion and celebrity portraits.

“I don’t think it’s a departure,” Mr. LaChapelle told Gallerist about his still lifes. “I stopped doing celebrity fashion in 2006 to make a home in Hawaii where I live today. And then I got asked to show at galleries again.  And I just embraced that new option.” He spoke slowly and sincerely. “But it was where I originally began in New York. Galleries in New York. They’re the same ideas that I was dealing with as a kid in the ’80s.”

The room was so crowded you could hardly see the artwork. In some cases, as with all of Mr. LaChapelle’s happenings, the crowd itself could have been fodder for one of his shoots.

“He always liked to take me apart,” said Ms. Lepore about what it was like to be photographed by Mr. LaChapelle, “and put me back together with a make-up artist.”

Daphne Guinness was wearing a glittering shoulder sculpture. “Daphne’s such a creative person,” said Patrick Toolan, an artist liaison with the gallery, about Mr. LaChapelle’s muse and supporter. “She appreciates beauty on a whole different level, on a different realm that they see together.”

As we approached Ms. Guinness, she stopped momentarily to give us an impression of her shoulders, adorned with heavy silver sculptural snakes like hood ornaments. And then she was gone, back through the door where a long had formed of people waiting to enter the party.