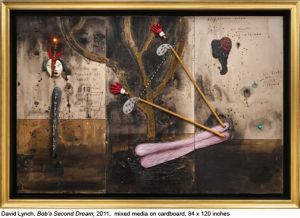 Next week Tilton Gallery on East 76th Street will host filmmaker David Lynch’s first solo New York exhibition since 1989. Mr. Lynch first entered the film-making world with short films at the Pennsylvania Academy of Fine Arts in Philadelphia, where he studied as a visual artist.

The show will feature sculpture, works on paper, photographs and a 42-second film. The artist’s paintings will appear in gold frames under glass, in the style of Francis Bacon.

The works are all fairly recent, the majority having been made between 2009 and 2012, said Mr. Tilton’s wife Connie, who was immediately available for comment.

“Jack has known David for many years. I remember we visited him at his studio twenty years ago,” Ms. Tilton said. “They’ve been talking for a while and it just seemed like the right time to everyone. We’re thrilled. It’s going to be a fantastic show.”

The show opens March 6, with an artist’s reception on March 16.