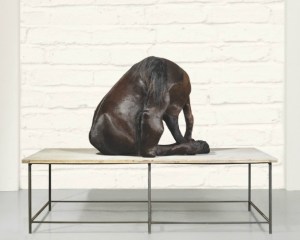 And as my colleague Michael H. Miller noted, Christopher Wool nabbed a $7.8 million record. Things are looking good, for the moment. Happily, Mr. Wirth does not need to worry about his collector’s flipping work in front of his eyes: the Houseago comes from the Herald Street gallery and the de Bruyckere was sold from Galleria Continua.