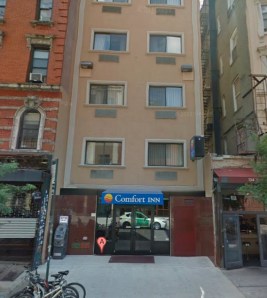 The organizers of the Dependent Art Fair have announced the roster for its second iteration at the Comfort Inn on Ludlow Street on March 10. During last year’s Armory Show, the fair’s first edition drew crowds to two floors of hotel rooms at the Four Points Sheraton on West 25th Street for an evening of intimate, off-beat art (the gallery Cleopatra’s of Greenpoint, for example, filled their bathroom with a flower installation).

This year’s edition features five more exhibitors, and will be open from noon until 8 p.m. compared with last year’s 5 p.m to 9 p.m. An annotated version of the participants, from the Dependent website, follows:

“The Dependent recognizes it is not inventing anything; hotel art fairs are a common model and how the Armory began,” one of the fair’s organizers, who asked not to be named, wrote in an email. “What we learned from last year is to just do the same thing again. Negotiate the tan cube (hotel rooms) with great art and don’t stay open too long. Offering an inexpensive fair to rigorous galleries and projects still seems like a necessary alternative.”