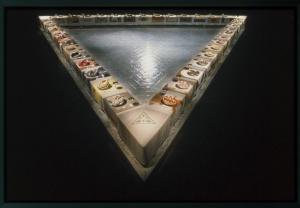 The Brooklyn Museum’s Elizabeth A. Sackler Center for Feminist Art turns five in 2012 and has a whole slew of events to celebrate.

If you’ve never made it over to the Center, the highlight is its permanent installation, Judy Chicago’s Dinner Party (1974-79), a long triangular dinner table filled with painted plates that become more elaborate (and, uh, let’s say anatomical) as the table extends. Other artists that have been showcased there include Eva Hesse, Lorna Simpson and Kiki Smith.

Dr. Sackler, the philanthropist who founded the Center had this to say in a statement: “It has been a pleasure and a privilege to help create and develop this Center that celebrates and nurtures not only one of the most influential art movements of the twentieth century, but creates a venue for the exchange of information and ideas that are of vital importance to feminism.”

There will be two major exhibitions on the occasion of the Center’s fifth anniversary: The first U.S. exhibition of British artist Rachel Kneebone, “Regarding Rodin,” which will presents Ms. Kneebone’s work alongside 15 porcelain Rodin sculptures, and “Newspaper Fiction: The New York Journalism of Djuna Barnes, 1913-1919,” a show of drawings, photographs and stories focused on the Nightwood author and activist (Barnes also conducted the definitive interview with James Joyce for Vanity Fair).

Beginning in March, there will a series of presentations and performances. We’re particularly excited for the screening of Breakdown, a film by Liz Magic Laser, Simone Leigh and Alicia Hall Moran. A full list of events is available here.