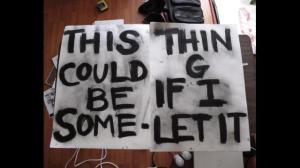 A work by Ms. Kasper.

Crammed into a corner on the third floor of the 2012 Whitney Biennial is an interesting road block. For her contribution to the show, the artist Dawn Kasper has moved into the museum, and her stuff is everywhere. It overflows into the walkway, where people inevitably stopped to gawk at a press preview on Monday. There were two stacks of books resting on the floor (Didion’s Play It As It Lays is on top of one; Deconstruction & Criticism atop the other), record players, amplifiers, radios, a projector flashing a Buster Keaton documentary onto the wall, a bed, more books resting on a large bookcase (heavy on theoretical texts) and tables with piles of works-in-progress. Photographs were hung all over the walls.

“It’s called This Could Be Something if I Let It,” she said to a visitor, pointing to a sign that has the work’s title printed on it.

“Cool,” the visitor said. “It’s like…a normal apartment. If I could have applied I would have. I mean, if they’re giving away apartments and everything.”

A German television crew was trying to interview Ms. Kasper, but she was busy turning on all of the electronics. She was friendly and jittery, running around and inspected the piles of objects in the space. They ranged from commonplace (large columns of storage boxes) to bizarre (an old tennis racquet connected to a small motor and spinning fast). Radios and records and the Buster Keaton doc were all playing at the same time. Ms. Kasper said she was “testing the batteries,” but also admitted that the noise helps her because she gets nervous. She was reluctantly turning down the cacophony while explaining to another visitor that she’s allowed to take naps during museum hours. She said she hoped people would come by and read books and listen to records.

Ms. Kasper has been without a permanent studio since 2008. When the Whitney curators did their studio visit with her, it was in a friend’s living room. It’s hard to say if the installation will become the “something” in its title, but at least she has a steady place to work for the next three months.