Woody Harrelson is doing the rounds for his new movie Rampart, but in this age of viral buzz, press junkets just aren’t enough. These days, people don’t want to read the same canned answers asked by reporters and filtered through a PR agent: they want to directly interact with famous people. (Isn’t that why Twitter was invented?)

In less than two hours, Mr. Harrelson will be taking to Reddit’s AMA (Ask Me Anything) subforum, where for an hour he’ll be answering nerd questions about just how much marijuana he likes to smoke and some-such. So to stand out from the crowd and make sure the actor answers your query, here are some awesome questions to ask Woody Harrelson.

– When you pushed that paparrazo in the face after wrapping Zombieland and you told TMZ that you were still in character and thought he was a zombie, weren’t you worried that putting your fist right next to the mouth of an Infected might end up with you getting bitten? Wouldn’t it have just been better to take his head off with a shovel?

– Follow-up question: what kind of zombie knows how to use a camera? They only have the most rudimentary of motor skills.

– Your new film is about a renegade cop in Los Angeles in the 90s. As someone who has played both law enforcement and criminals, what are your thoughts on Occupy Wall Street’s clash with the Oakland police force?

– Okay so if you had to pick a post-apocalyptic zombie scenario would you rather be A) Trying to outrun several of those really fast zombies from 28 Days Later on the open road, or B) Trying to outsmart hoards of very slow zombies in a small apartment building.

– What was it like to work with acclaimed director Oliver Stone on Natural Born Killers?

– How much fun did you have on Will & Grace as Grace’s boyfriend Nathan? Is Debra Messing as nice on set as she seems?

-If forced to, would you terminate Debra Messing because she’s been bit by a zombie and is begging you to just finish her, or would it be too difficult to shoot her in the face while there is still a semblance of Grace Adler in her eyes?

-Who is your favorite Downton Abbey character and why? 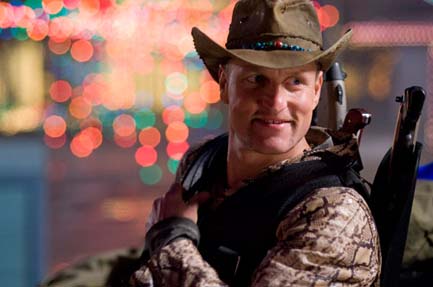