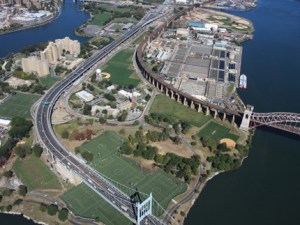 On Friday, for some routine research, we had another look at the list for the Frieze Art Fair’s first New York outing, which hits Randall’s Island May 4-7, and we noticed something new: Gagosian gallery, which wasn’t on the list when Frieze initially released it on Nov. 17, now appears there. This would be considerably less momentous if Gagosian weren’t by a long shot the world’s largest, most powerful gallery, and has also never before participated in a New York art fair. (The gallery is not a member of the Art Dealers Association of America (ADAA) and therefore has never participated in that organization’s fair, the Art Show, which runs March 7-11, concurrent with The Armory Show.)

We got in touch with a representative from Frieze, who told us, in an email, that while the fair “can’t comment on individual cases,” she could illuminate a number of scenarios that might account for a gallery being added after the fact, as seems to have occurred here.

When the list was released back in November, it was still in formation, the Frieze rep explained. The appeals process may be ongoing for galleries appealing a rejection, and the list is always announced in advance of the fair’s final architectural plans (the tent’s floor plan, in other words, hasn’t yet been set in stone). The fair also may accept late applications “at the discretion of the selection committee,” though the Frieze rep added that “this can happen only while there is still space available in the architectural plan.” Additionally, the rep noted that galleries do occasionally withdraw from the fair, thereby freeing space.

The point about the selection committee is crucial because selection committees, composed of dealers, are the gatekeepers of art fairs, and while their workings are generally shrouded in secrecy, their decisions carry a great deal of weight, and can cause a great deal of upset–see Eigen + Art’s forced one-year hiatus from Art Basel. They also occasionally stir up a lot of finger-wagging about conflict of interest. (This year’s committee was comprised of dealers Tanya Bonakdar; Eivind Furnesvik, of Standard Oslo; Jeanne Greenberg, of Salon 94; David Kordansky; Andrzej Przywara, of the Foksal Gallery Foundation; and Esther Schipper.)

We are unlikely to find out the precise scenario through which Gagosian gallery, which has participated in all nine editions of Frieze in London, was admitted to the fair at this late date, but it seems clear that the gallery’s participation is a vote of confidence for the fair’s inaugural New York edition.