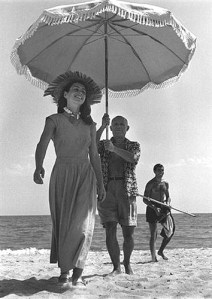 Part four in Gagosian’s ongoing series of epic Picasso exhibitions is set to hit New York on April 30, and the focus will be work made during the artist’s relationship with Francoise Gilot in the 1940s and early ’50s, Bloomberg’s Katya Kazakina reports in the wire service’s new Pursuits magazine.

Ms. Gilot, 90, is famously known as the only woman ever to leave the insatiable artist. “I am very independent,” she told Ms. Kazakina. “I was a completely new type of woman for him.”

Picasso biographer John Richardson is once again providing his expertise for the show, and shares this of a work that appeared in one of the gallery’s earlier Picasso shows: “A self-portrait with the red around the eye I find absolutely terrifying. It’s Picasso outstaring death.”

Want to buy a Picasso? Gagosian director Valentina Castellani–described by Mr. Richardson as “Larry’s right hand” (she got him the job with Gagosian)–had this to say: “We always have a few works for sale. … We send out a message that Gagosian is a place where you can both sell and buy Picassos of the highest quality.”