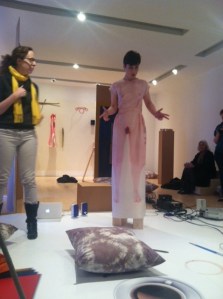 Ms. Sagri at the Whitney Biennial. (Photo by Rozalia Jovanovic)

The 2012 Whitney Biennial kicked off with a well-attended press preview Monday afternoon. The schedule of events had one ambiguous listing: “2:30-3:30 p.m. Georgia Sagri 5th Floor mezzanine.”

Walking into the 5th floor’s Sondra Gilman Gallery, Ms. Sagri, small, striking and frowning deeply, stood on a piece of white vinyl wearing all black, an outfit that matched her dark crop of hair. The floor was covered in pillows, some of which members of the press were sitting on. Lining the perimeter of the vinyl sheet were various electronics, including a laptop computer; behind these, clothing hung from the walls, on hooks. Near the walls were large, freestanding pieces of wood with doors painted on them.

“So, hi,” Ms. Sagri said in a sweet voice, her face still grave.

“I just wanted to let you know you can pick up the pillows if you want,” she continued, picking up a pillow. “You can move them around, you can sit on them. Of course, it would be nice if you didn’t steal them or anything.”

The audience chuckled, but was cut off when Ms. Sagri said, with her deepest scowl yet, “I just wanted to let you know I’m not going to be performing for the press. It’s going to be a rehearsal.”

“When does it start?” an audience member called out.

“It’s already started,” Ms. Sagri said, walking over to a laptop and fiddling with the keyboard. A recording of her voice giving the press the speech she had just given began to play through a speaker. She began to lip-sync along with the words, saying some of them aloud. She moved her body in choppy, contrived motions, running in place and bending her arm in the manner of a symphony conductor. She began to repeat the words again. She stuttered over them or said them in slow motion, sometimes doing both at once.

Ms. Sagri ran to the back of the gallery and dropped her black outfit to the floor in one fluid motion. She hopped behind one of the wooden boards and grabbed a piece of clothing that was hanging from the wall. The recording still played on a loop, reminding everyone it was only a rehearsal. She was out of view for a little while.

She emerged wearing a white gown with a pink naked body printed on it. She strapped her feet onto two wooden blocks that were about a foot high and stood. Taller now, she scanned the room, making eye contact with members of the press. Then she repeated herself.

“I just wanted to let you know that I’m not doing a performance for the press.”