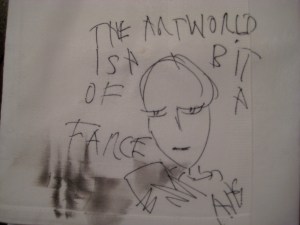 Someone Who Works for This Organization.

In honor of Anthony Haden-Guest’s benefit tonight at the Maritime Hotel’s Hiro Ballroom, at which the writer, charging attendees $30 a pop, hopes to raise money towards his lawsuit against Public Storage, we publish the accompanying drawing Mr. Haden-Guest made two years ago on the tablecloth of a London restaurant of, well, let’s just say it’s someone who works for this organization, eyes narrowed peevishly, fiddling with her Blackberry as though her life depends on it, and saying, “The art world is a bit of a farce.”

For those just tuning in to Mr. Haden-Guest’s storage conundrum, the writer, who last wrote for The Observer about Damien Hirst and who is the author of several books, including 1996’s art world tell-all True Colors, failed to pay Public Storage $1,350, and the company proceeded to sell a 34-year accumulation of his belongings for, according to Mr. Haden-Guest, $630. Now, that buyer is threatening to sell everything, presumably at a great profit–there’s some art involved. The writer is looking to get everything back.

The benefit, aptly dubbed “Public Storage Blues,” features a pretty impressive roster of performers–the following is from Mr. Haden-Guest’s invitation: “Nile Rodgers, who will read from his book Le Freak, James Chance, Walter Steding, Michael Holman, with Gray, Paul Miller AKA DJ Spooky, Matt Katz Bohen, Anthony’s American cousin, who plays keyboards with Blondie, and the wonderful Broadway singer Melissa Errico. John Cale will do something but isn’t quite sure what! Penny Arcade will perform and MC, along with Stuart Braunstein.”

Michael Portnoy will also perform, and Lorraine Leckie has set some of Anthony’s lyrics to music. Mr. Haden-Guest himself will read from a work in progress, titled, again aptly, Public Storage Blues. And, apparently, to top things off, there is a “surprise guest.”

So, maybe check it out. Look sharp, bring a Sharpie, and direct Mr. Haden-Guest to a tablecloth, and you could make out pretty well for your 30 bucks.