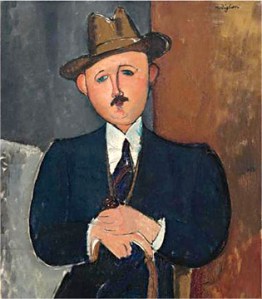 The work in question.

The billionaire art-dealing Nahmad family recently offered a new defense in an ongoing lawsuit that accuses its gallery of owning a work by Amedeo Modigliani that was stolen from its original owner by the Nazis. Philippe Maestracci, the heir to the collection that he says should include that work, has sued for its return, but the Nahmads recently offered a new defense that says they don’t technically own the work.

The Nahmads bought the work at Christie’s, London, in June 1996 for $3.2m, according to the online publication Artnet. However, the court papers state: “The International Art Center purchased the painting… the painting has been openly and publicly exhibited at various museums and galleries throughout the world since 1996, when the IAC acquired ownership.” Christie’s catalogue entry states that it had previously belonged to the Paris collector Roger Dutilleul and was later sold to J. Livengood, also in Paris, around 1940 to 1945. The provenance did not indicate spoliation.

The ball is back in Mr. Maestracci’s court, it would seem.