This “Blessed Event” video reminds us of how far the whimsical comedy group Improv Everywhere and its ilk have come since their inception…and not in a good way. It used to be that Charlie Todd‘s gathering of merry pranksters would do something to surprise and delight people, like that frozen Grand Central piece, or impromptu musicals about food courts.

Now it’s all this second layer weirdness, where we’re supposed to believe that an actual Improv Everywhere experience is getting interrupted by some assholes, like last April Fool’s where some “punks” beat up an Improv actor dressed as Jar Jar Binks. Mr. Todd even made a video urging people with knowledge of the event to call the police if they had any information on the individuals. That’s not funny, because the “joke” of these things should be that by the end, the audience feels like they’ve witnessed something magical, not a hate crime.

So it’s sad to see this Improv Everywhere knock-off group Northern Manhattan UP Theater Company pulled a similar stunt at the 181st and 186th street stations recently, (as some sort of protest to removing the token booths?). Not only that, but once you get to the whole “guy trying to ruin the wedding” part, it becomes very obvious that this is a regional theater troupe who has run out of rehearsal space. The only people who are laughing about this are the actors: everyone else is just annoyed at the interruption of their commute. 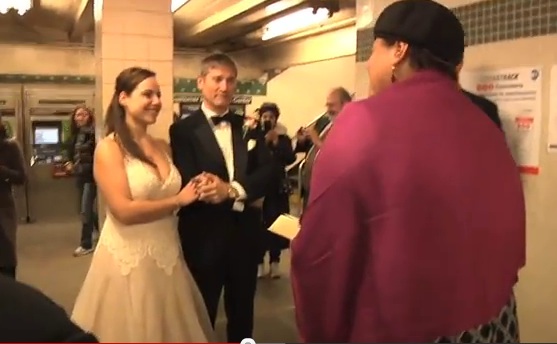