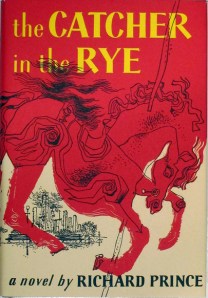 "The Catcher in the Rye" by Richard Prince. Courtesy Vice.

Over at Vice, the writer and curator Bob Nickas has a new column called Komplaint Dept., where he’s been taking on artists like Christian Marclay and, most recently, Richard Prince.

The Richard Prince essay is really something else. You should read it for yourself. It’s several thousand words and exists in two parts. In it, Mr. Nickas informs us that the same judge that presided over a 2009 court case between the writer J.D. Salinger and a Swedish author Fredrik Colting–who Salinger sued for writing a “sequel” to his novel Catcher in the Rye, called 60 Years Later: Coming Through the Rye–was the same judge in the recent case of Mr. Prince and photographer Patrick Cariou. Mr. Cariou sued Mr. Prince for infringement and won; the case is now in appeal (more on that here).

It turns out this is a pretty significant coincidence. Mr. Nickas writes:

Consider a recent, somewhat elusive work by Richard Prince, his facsimile version of the first edition of J.D. Salinger’s The Catcher In The Rye. Although the two books physically appear the same, having identical cover artwork, with both Salinger’s and Prince’s being dedicated “To My Mother,” there are a number of differences between them, most obviously the author’s attribution. Rather than “a novel by J.D. Salinger,” we see: “a novel by Richard Prince.” Is this a comment after-the-fact on these cases, presided over by the same judge? Or just one of life’s great coincidences?

Or, as Holden Caulfield might ask, are they all just being a bunch of “Goddamn phonies?”