In a video posted Sunday on a popular Youtube channel devoted to distributing its “Official Messages,”  Anonymous addressed the people of Greece as well as the rest of the European Union. Narrating images from Athens in its usual synthesized, accent-free voice-over, the amorphous hacker collective denied it was behind the massive riots that rocked the country Sunday but expressed solidarity with Greeks impacted by the austerity measures, stating that the Greek government has “avoided the people’s requests” and “refused to listen to its people.”

Anonymous chided the government for “not complying” with their demands and said that while they did not “organize these riots in any way,” they did “spread the word” of the Greek government’s failure to comply with the people’s wishes.

The language of the message then veered into ominous territory:

Anonymous is continuing their attacks against the Greek government, and will not stop until the people get what they want. If this does not happen Greece’s government will fall. This is also a warning to all the other European Union counterparts. Italy, Spain, Portugal, Britain, Poland, and all the others will suffer the same fate as Greece’s.

As is often the case with announcements from Anonymous there seemed to be room for interpretation: was the warning regarding online actions–aggressive hacktivism against government websites, for example–or did it imply Anons would indeed begin to proactively organize violent, destructive protests similar to the Sunday riots in Greece in other European states?

Whatever the case, Anonymous’s message to the Greek government was characteristic and clear: “you should’ve expected us.” 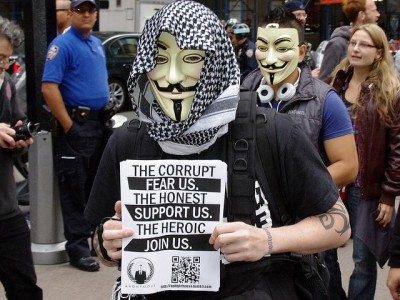