Say what you will about investment banking as a benefit to and/or plague on the finance sector, economy, New York City, and the universe in general. Now there’s science to back the idea that, yes, investment banking is actually, medically ‘bad’ for one’s health. How bad? Try “insomnia, alcoholism, heart palpitations, eating disorders and an explosive temper” or at the very least “a stress-related physical or emotional ailment within several years on the job.” Science!

The Wall Street Journal reports that the results of University of Southern California assistant professor Alexandra Michel’s ten-year long study of “roughly two dozen” entry-level bankers at two anonymous investment banking houses (who participated on the condition that they remain anonymous) will be released later this month in the next issue of Administrative Science Quarterly, with evidence explaining that conclusion.

Not a few, or a majority, but all of the bankers apparently exhibited the aforementioned stress-related ailment within a few years on the job.

If you think camping out in Zuccotti Park is hard, try this on for size:

By the fourth year, however, many bankers were a mess, according to the study. Some were sleep-deprived, blaming their bodies for preventing them from finishing their work. Others developed allergies and substance addictions. Still others were diagnosed with long-term health conditions such as Crohn’s disease, psoriasis, rheumatoid arthritis and thyroid disorders.

One vice president described work as a never-ending nightmare, waking up every morning and wishing the day before “was just a bad dream.” Another vice president said he was so worried others might notice his drinking problem that he would “keep losing half of what they are saying.” By the sixth year, the participants, now in their mid-30s, had split into two camps: the 60% who remained “at war” with their bodies, and the remaining 40% who decided to prioritize their health…

Some are addicted to prescription drugs like Adderall or Ritalin. To cope, they resort to “depersonalization,” a feeling of numbness toward the rest of the world. A few have been suicidal.

Maybe the Occupy movement’s next strategy could just be some kind of counter-intuitive mind game encouraging investment bankers to work harder than ever, at which point they’ll just sputter out and collapse. Of course, this could easily go the way of Michael Douglas in Falling Down. In which case, please don’t color that an endorsement.

Do you know any investment bankers who have lost their minds and their bodies on the job? Do you have any particularly great war stories from those trenches? Are you an investment banker currently in the throes of total, REEEDDRUMMMM-like psychosis? Were you part of the study? If so, we’d love to hear some of your fun anecdotes. Give us a shout! 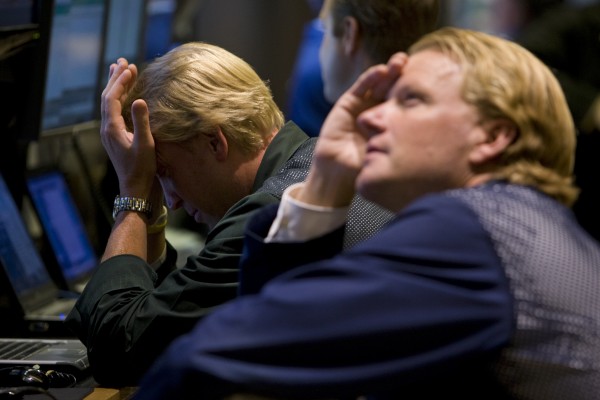