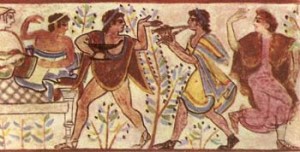 Late last year, Italian authorities raided two homes as part of an investigation into a gang suspected of wide-ranging archeological fraud, The Art Newspaper reports today. The gang is said to have been experienced in Greek and Etruscan forgeries, and the arrests end a two-year investigation.

Key to the plot was an x-ray machine that police have also confiscated:

The x-rays interfered with the outcome of any thermoluminescence testing of these modern pieces. Thermoluminescence is the faint light emitted by a ceramic that has been fired at a sufficiently high temperature. This light can be measured to establish the age of the piece; the brighter the light, the older the piece. Test results are invalidated if the piece is exposed to radiation.

The thieves were caught because they’d been trading their fake pieces for real antiquities from the collection of Marquis Roberto Bilotti Ruggi d’Aragona, who became suspicious of his partners after he refused to trade them one piece, which was then subsequently stolen via burglary.