Jason Wu-mania over at Target


Target: has a brand ever before fully encompassed Tina Brown‘s vision for a high/low cultural Utopia? Take for instance, the outlet’s weekend release of its new Jason Wu collection just in time for New York’s Fashion Week (for people who don’t live in New York). The collection sold out across the country only hours after they hit the shelves, and pretty soon the items were popping up on Ebay for resale faster than you could say “This is worse than Versace doing H&M.”

So what was the cause for this massive buyout? Apparently, couples like this:

Using techniques not seen outside of Black Friday or a Barney’s Warehouse sale, these two Miami gentlemen bought an entire store’s worth of Jason Wu, then gloated to other customers how they would be reselling their stock outside.

The police were allegedly forced to get involved after the man in the pair got into a shoving match with a woman in line after she tried to steal something from their cart. Why the store employees didn’t rush these men and take back the carts themselves to distribute amongst the other customers has been a matter of much speculation, as Target is supposed to have a 2-item-per-style policy in place. (Since so many of the items immediately appeared on Ebay, we can only assume this policy wasn’t enforced in a lot of stores.) The New York Observer has reached out to Target for comment, but has yet to hear back. This is not the first time Target has caused semi-riots with its designer labels: last fall, a Missoni collection launch caused Target.com to go dark when it was overwhelmed with online shoppers, meaning that people had to actually go out to their local target to purchase the hippy dresses.

Updated: A spokesperson from Target told the New York Observer that they did not enforce the quantity limit as a national store policy for the Jason Wu collection. “We did test limitations on Target.com, so people could only two items of any given item in a particular size, and some stores did elect to enforce the 2-item policy, but only in select locations.” 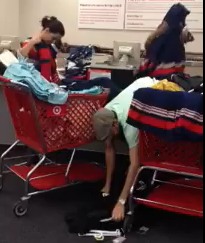