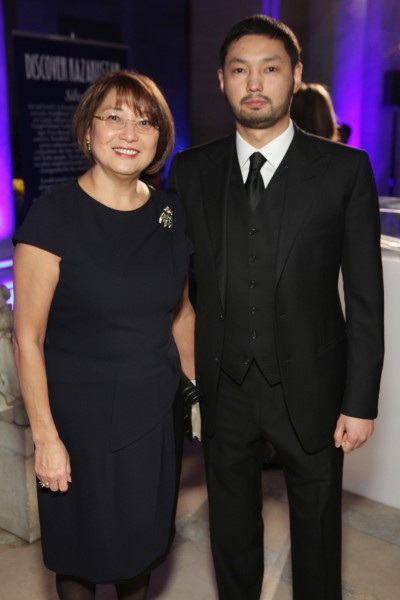 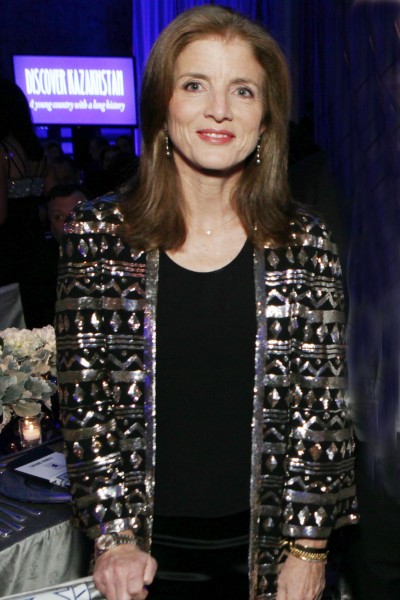 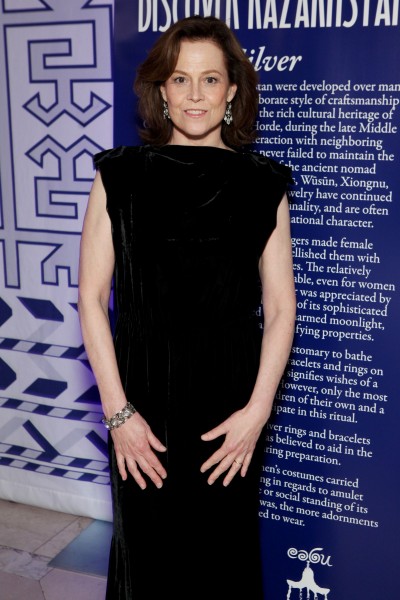 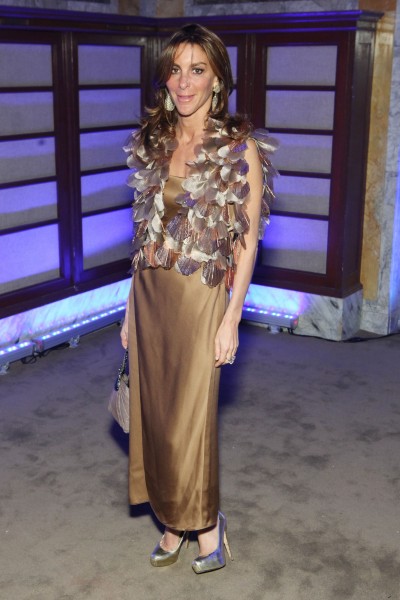 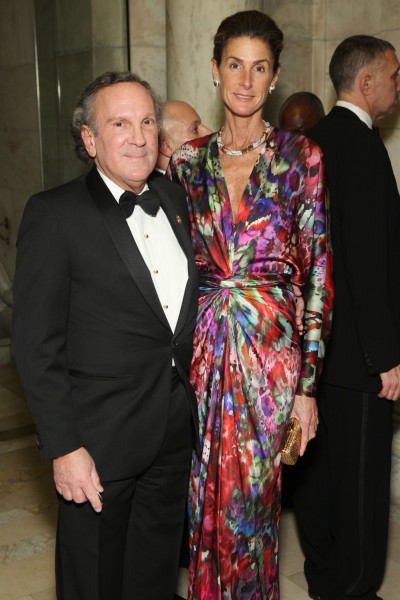 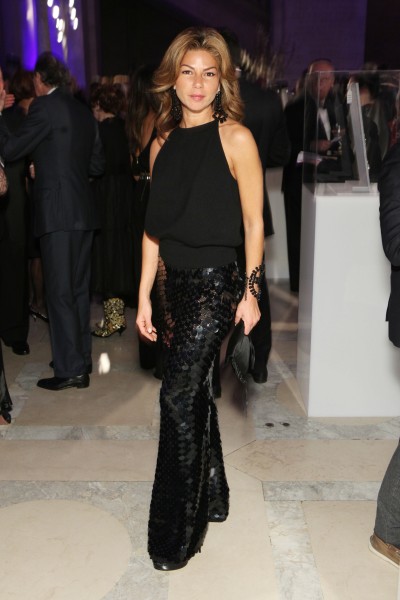 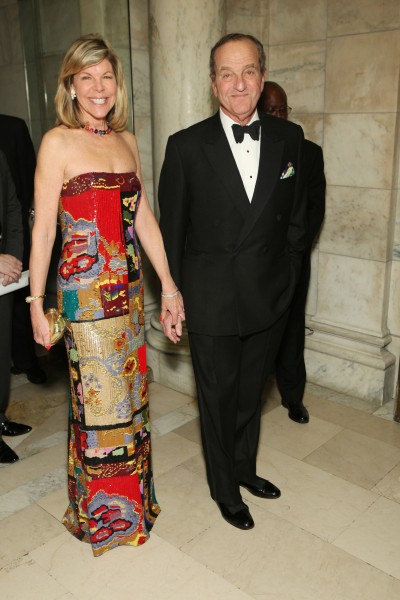 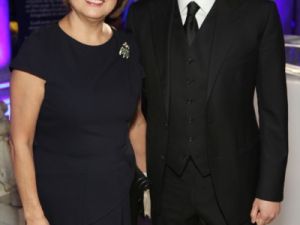 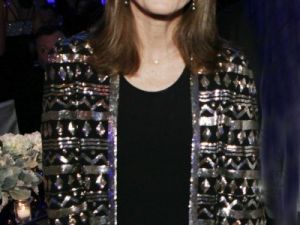 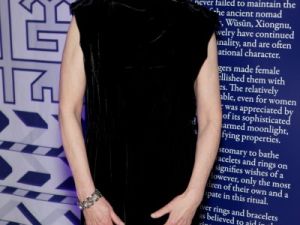 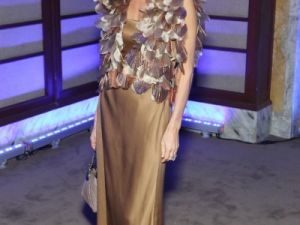 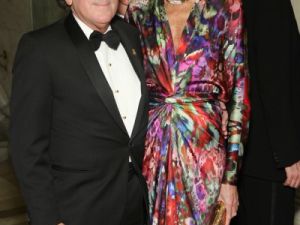 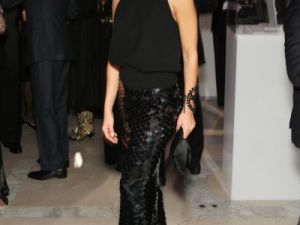 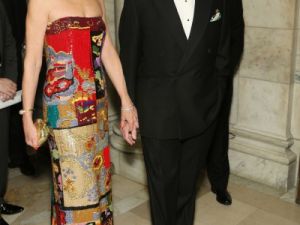 “I’m wearing Lanvin,” she said in an exaggerated French accent, perhaps a remnant of Fashion Week reverie. Indeed, Ms. Weaver was one of many gowned sophistiquées packed into the main atrium of the Public Library appraising a mannequin clad in traditional Kazakh bridal wear. Despite their dapper bow ties and rarefied dresses, none of the evening’s patrons or patronesses—Jonathan and Somers Farkas, Aselle Tasmagambetova, Domenico Vacca and Eva Lorenzotti among them—could rival the richly embossed, regal red jacket or the towering silver diadem sitting atop the faux bride’s faux cranium. We had never seen anything like it, we realized.

By birthright, we have long since focused our global gaze on the lands of our Western European kin. While we can recite the name of every English monarch onward from Edward the Confessor and have traced the lineage of French aristocrats in the Sorbonne’s hallowed halls, we are sometimes startled by the sheer vastness of the world outside our forebearers’ ambit. The smattering of post-Soviet states in Central Asia is, to be sure, a part of the world as foreign as the moon to the chaste European ego, and until very recently we counted ourselves among the unenlightened majority who confused Tajikistan, Turkmenistan and Kazakhstan. Since the “Discover Kazakhstan” gala last week, however, at least one country in the region has been illuminated, no longer a dark spot on our mental map, which has always counted the Greenwich Meridian as its primary point of reference. We were pleasantly surprised. As were others.

“I was just so impressed by how cultivated the people were, how elegant, how much they loved the arts, and frankly how little Americans knew about them,” Ms. Weaver confessed. We admitted we were one such American. “It’s a horse culture because it’s a nomadic culture. They are so strong and tall and elegant and beautiful,” she said, listing her strongest impressions from a recent trip to the country. “Tonight, people are going to get a taste of Kazakhstan.”

And taste we did, a lamb dumpling and a grilled shrimp steeped in some unfamiliar herbal marinade. Drinks in hand, guests and deferential waiters wended among the glass cases showcasing the evening’s main attraction: brilliant Kazakh jewelry. In conjunction with Christie’s and the Nomad’s Way Project, a charitable endeavor of the Saby Foundation, several top jewelers had crafted sumptuous cameos inspired by historical Kazakh designs. Interspersed among the contemporary creations were indigenous pieces dating back hundreds of years.

Like most of the evening, we found the designs beautifully foreign. The silver-heavy pieces tended to have horizontal inclinations, not vertical ones like the familiar pendants of European provenance. One robust item particularly caught our eye: an antique chandeliered necklace, composed of massive silver plates that could have been worn only by a noble neck with muscles specially trained to manage such imperial hardware. Cultural vocabulary translated directly to the realm of jewelry.

After a wave of guests sashayed briskly in our direction, speaking languages we wish we understood, we realized we were standing next to Jacob Arabo, better known by his professional handle, Jacob the Jeweler. “I am Uzbek. I was born and raised right next door,” he said, offering a welcome geography lesson. “Basically for me, this is like my home, this is my family and this is my people,” he said, surrounded by a throng of satisfied customers and companions.

A gong’s brassy ring sent guests downstairs to the Celeste Bartos forum, where an elegant scene was arranged. “If I folded one of the tablecloths up and put it in my purse, do you think anyone would notice?” Jamee Gregory gabbed gleefully. We didn’t know the answer, but it was apparent that the blue and white décor, from the tablecloths to the chair covers, was perfectly suited to the occasion. Evoking a sort of Venetian glow, the byzantine designs captured the interface of East and West.

We spotted Caroline Kennedy, wearing a jacquard jacket with a vaguely festive geometric embroidery, who admitted she had never been to Kazakhstan. The region, however, fascinates her. “I went to Central Asia for my anniversary last summer. We went to Uzbekistan, but I want to go back now to Kazakhstan,” she said. We wondered why so few Americans seem to know about a country with so rich a history. “There’s a lot of things we don’t know about that we should, and this is one of them,” she said, evoking her late father’s ardent internationalism.

Sitting down at our table, we found our tablemate greatly impressed by the spread. “This is really a throwback,” she drawled. “They don’t throw parties like this anymore.” Indeed after several lively conversations (not to mention a duck confit lentil soup and an herb-crusted rack of lamb), we were feeling a variety of satiation not generally experienced at benefit dinners. Guests circulated the room between courses, finally settling back into their seats for the auction.

Guests were generous, very generous, to Kazakhstan. One particularly ornate diamond necklace was sold for $250,000. By the end of the evening, more than $1 million had been raised to support arts education in the nascent country. The crowd was jubilant, ebullient and tipsy from wine and Kazakh vodka.

After a performance by R&B popper Robin Thicke (who, in an homage to Fashion Week, kept his sunglasses on throughout the set), guests said cheery goodbyes and collected their coats.

On the way out, we managed to speak to Kazakhstan’s ambassador to the United Nations, Byrganym Aitimova, who suggested that her country may not be so very different from America after all. In both places, she posited, hospitable people abound, and a fierce sense of proud independence pervades the culture, adding, “I would like to express my observance here in New York that the similarities are much more than the differences.”