Embattled Comptroller and likely 2013 mayoral candidate John Liu started off his State of the City address today with a “shout out” to pioneering Chinese-American New York Knicks phenom Jeremy Lin.

“I’d like to give a shout out to someone who is not here in body, but he’s on everybody’s minds, a guy who’s been carrying the Knicks for the last couple of weeks; Jeremy Lin,” Mr. Liu said to a huge round of applause. “A Harvard graduate, he’s on the cover of Sports Illustrated and the guy gets great headlines in the New York Post. I’ve got to get some tips from him.”

Mr. Lin sparked a media frenzy after coming off the bench to lead the Knicks on a seven game winning streak. His rise has included a series of memorable front pages in the city tabloids.

Mr. Liu hasn’t received such favorable press coverage and has been a near daily target in the tabloids.  His speech came against the backdrop of new developments in the fundraising scandal that has damaged his once-promising mayoral ambitions. Yesterday, one of his supporters, Xing Wu  “Oliver” Pan, was indicted on federal fraud charges for allegedly employing a system of “straw donors” to illegally funnel $16,000 to Mr. Liu’s campaign committee.

Mr. Liu proposed a series of new initiatives in his speech including a hotline, 2-1-2 NO-WASTE, city employees, contractors and residents can use to report waste. At the end of his remarks, he brought up Mr. Lin once again as evidence the city should be willing to try new approaches.

“You never know what potential can be unlocked when new stuff is given a chance,” Mr. Liu said. “Just think about what Jeremy Lin has achieved, which would have been unimaginable just a couple of weeks ago.” 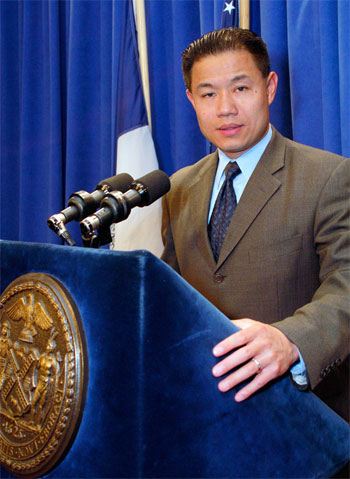