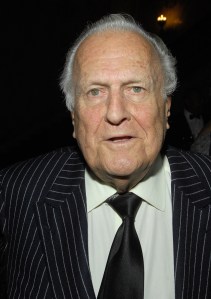 The British-born Picasso biographer John Richardson was recently named a knight and, in an interview with the Evening Standard to mark the occasion, showed that time has not tempered his personality or candor.

You should really just go read the thing yourself, but among the choice revelations is the fact that he once came back from America with a tattoo, and when Pablo found out he was infuriated. “I would have tattooed you!” he apparently said.

Apparently Picasso had always hoped to do a Cubist still life on someone’s back. He was about to do one on Georges Braque in Paris, in fact, but the First World War intervened. It was perhaps Picasso’s preference for the DIY “prison” method (needle, ink, pain) that put Richardson off – “It would have hurt.”

For his investiture, Mr. Richardson was offered Prince Charles but really thought it would be better to wait for the Queen, so that’s in April.

Also revealed: Mr. Richardson’s Fifth Avenue apartment resembles an “Italian palazzo and contains one of the largest penises in the world, purchased from a whaling museum.”