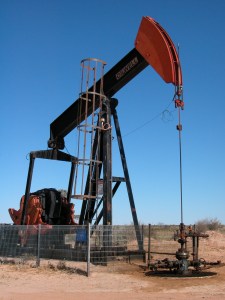 According to Ms. Meckseper, in the release:

“I hope to draw parallels between the American industrial system, transitioning from a past of heavy industry, factories, and teamsters and the disembodied present of electronic mass-media, surface advertising, and consumerism – so clearly embodied in Times Square,” explained Meckseper, “The critical placement of the pumps is a conceptual gesture that raises questions about business and capital; land use and resources; wealth and decay; decadence and dependence.”

The project will run until May 6. The last project in the series featured the artist David Brooks.