“I think we should ultimately strive for publicly funded elections and, I think, if you can take the money out of politics, you can begin to restore people’s confidence in the system,” Ms. Gillibrand said. “The problem with the super PACs, in general, is that there’s no transparency, there’s no accountability, you don’t know who spent the money or what their agenda is.”

Though she hopes we eventually have publicly funded elections, in the meantime, Ms. Gillibrand said she’s working on legislation that would force the super PACs to be more transparent.

“If you have a pro-green energy candidate, and the oil industry wants to spend hundreds of millions of dollars to take that candidate down because of their stance on green energy, they don’t even have to talk about that issue. They can talk about something else, but have no transparency in their ads,” Ms. Gillibrand said. “So, I have a piece of legislation that I’m working on with others, including Senator Schumer, to do exactly that, to at least have disclosure, so that they have to, at the end of the ads, say, ‘I’m Joe C.E.O. and I support this message,’ or, ‘Hi, I’m number one donor and I support this message.'”

Ms. Gillibrand isn’t optimistic about her legislation becoming law with the current Republican majority in the House of Representatives.

“It will take time to get it through both sides, but I think it’s very difficult to get that I don’t think the Republican House right now wants transparency in ads, so I think it would be difficult to pass it in today’s House of Representatives,” Ms. Gillibrand said.

“My view is, this election’s really important,” Ms. Gillibrand said. “I think voters should understand that this is an opportunity to show accountability and to demand candidates to support transparency and I think they can hopefully vote out some of these Republican House members that don’t want to do that.” 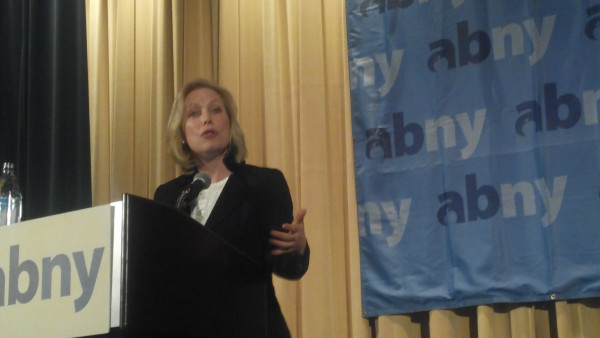