Two Los Angeles radio talk hosts have been suspended for what their station management termed “insensitive and inappropriate comments about the late Whitney Houston.” KFI AM 640 announced the suspension of John Kobylt and Ken Chiampou, hosts of the “John and Ken Show,” on Thursday after the comments were made February 14.

Choice quotes demonstrate why Mr. Kobylt and Mr. Chiampou’s remarks regarding the singer’s behavior prior to her death on February 11 were bound to prompt quick reactions:

John Kobylt issued an apology, saying he and his partner “made a mistake, and we accept the station’s decision.” Mr. Kobylt admitted the language was “inappropriate” and apologized to KFI listeners as well as Ms. Houston’s family.

Mr. Kobylt and Mr. Chiampou are noted in Southern California for their strong views on illegal immigration and the National Hispanic Media Coalition (N.H.M.C.) has called them promoters of hate speech. The Associated Press quoted N.H.M.C. president Alex Nogales, who said the hosts’ temporary suspension was “not enough.” Mr. Nogales continued, “How many times do John and Ken get to spew their hate, apologize and then do it again after taking off a long weekend?” Mr. Nogales called for KFI to “permanently remove” the “John and Ken Show” from their lineup.

Urban Informer has audio from the show. 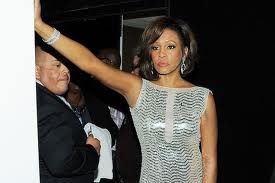