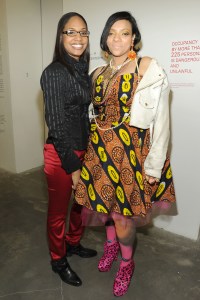 The 2012 Whitney Biennial opens to the public tonight, and the reviews have only just started coming in–The Observer published two last night. In the pre-show coverage, though, photographer LaToya Ruby Frazier, who previously appeared in the New Museum triennial and MoMA PS1’s Greater New York survey, has received a great deal of attention.

Ms. Frazier’s contribution to the show is a thorough evisceration of a Levi’s jeans ad campaign set in her hometown of Braddock, Pa. In her pieces she amends the optimistic images and slogans of the company’s ads (e.g. “GO FORTH,” an image of a handsome model working in denim) with comments about cuts in government services and rampant unemployment in the area. She also shot a series of documentary images depicting the actual state of life in the city.

Below, a brief look at a few of the profiles about the artist:

In Interview, Observer critic Maika Pollack speaks with the artist about a performance she did with Liz Magic Laser outside of a Soho Levi’s store. Says Ms. Frazier: “It came natural for me to tear a pair of Levi’s jeans as a political gesture and testament for the men and women whose views counter such a fictitious, superficial, propagandized ad campaign.”

Over on Time‘s Lightbox blog, which has a large number of images by the artist (including some from an earlier series she made of images of her family), she tells Paul Moakley, “I’m showing what the media is not showing—moments in the town that have been omitted from history and not just African American history, but the working class people I’m speaking about.”

In T Magazine, Ms. Frazier discusses caring for her step-great-grandfather, who had worked in Braddock’s steel mills for years, in the last years of his life, and who appears in some of her photographs: “I witnessed his body decay and crumble… Without financial resources or better access to health care, I did what came natural. I documented it.”

One more link: in 2010, we spoke with Ms. Frazer about her work at MoMA PS1 and her interest in Genesis Breyer P-Orridge on Artinfo.